On September 3, 2018, the EMA approved the single domain antibody (sdAb) drug Cablivi (Caplacizumab) in Sanofi for the treatment of adult-acquired Thrombotic Thrombocytopenic Purpura (aTTP). Cablivi became the first specific aTTP treatment and the first marketed sdAb drug. In addition, the FDA has granted Caplacizumab priority review designation with a target action date of February 6, 2019. According to analysts, the drug sales peak will reach $400 million.

▲ The TTP development of nearly a hundred years

Sanofi has a lot of layouts in the biopharmaceutical field, but it is also full of ups and downs. Considering the expiration of the patent for insulin glargine, Sanofi tried to acquire Mankind’s inhaled insulin, resulting in poor sales. A $4.2 billion agreement was reached with Hanmi on long-acting GLP-1 (Fc conjugation), and it soon shrank sharply. In the field of antibodies, Sanofi achieved cooperation with Regeneron Pharmaceuticals for a long time. Despite the successful launch of the PCSK9 antibody Praluent, IL-4/IL-13 antibody Dupixent and IL-6R antibody Kevzara have been launched, it is the biggest failure to miss Eylea. But Sanofi still hopes to make a difference in the antibody field. In January 2018, Sanofi bought Ablynx, a sdAb giant biotechnology company, for 3.9 billion euros. Caplacizumab is exactly part of the Ablynx product line.

In 1993, scientists first discovered single-chain antibodies; in 2001, Ablynx was established in Belgium; in 2007, the first sdAb entered clinical research; in 2018, the first sdAb Caplacizumab was approved for marketing in the European Union.

Caplacizumab contains 259 amino acids and is composed of two VHs with 128 amino acid linked by AAAlinker. The specific sequences are as follows:

Prior to Caplacizumab, there is no specific therapy for aTTP and plasma exchange or immunosuppressive agents is the only way to relieve aTTP, in which a mortality rate of 10-20% still happens, and it’s more likely to have treatment tolerance and rapid disease progress after stopping plasma exchange.
The specific TTP treatment is to prevent the formation of micro-platelet thrombus, of which ADAMTS13, ADAMTS13 antibody and vWF are major research targets. Now vWF firstly makes a breakthrough and is clinically proven for marketing. 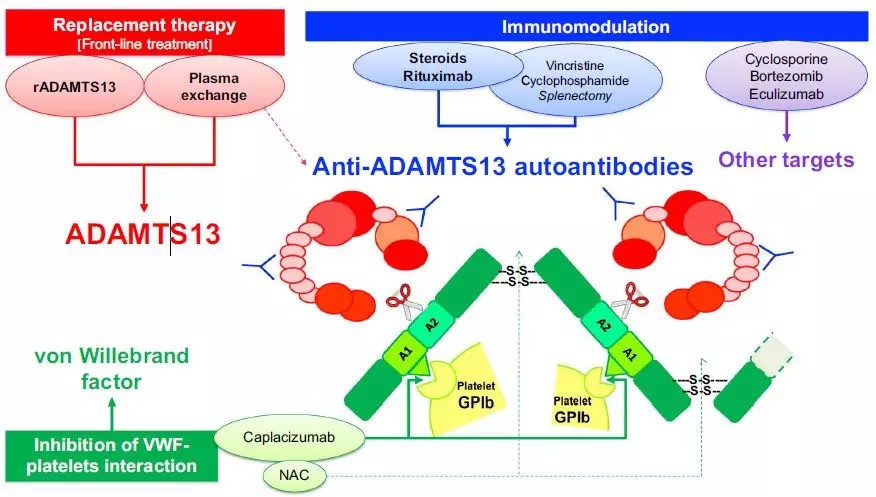 Caplacizumab binds to the A1 domain of vWF, which prevents the formation of platelet strings and is the first specific therapy for aTTP.

The primary endpoint of HERCULES is the time to restore normal platelet activity. The combined detection of aTTP-related death, aTTP, and/or major thromboembolic events also decreases by 74% compared with placebo.