Therapeutic antibodies first entered clinical studies in the early 1980s, soon after the description of the original hybridoma technology by Kohler and Milstein, but most clinical studies led to disappointments. Advancements in antibody engineering were instrumental at this stage and led to the production of chimeric, humanized, and fully human antibodies characterized by a much lower immunogenicity and the potential to interact more efficiently with effector cells of the immunesystem, including T and NK cells. This generation of antibodies has made great success in major commercial and therapeutic field, such as Trastuzumab, Rituximab, or Bevacizumab. These molecules have helped to establish the concept of therapeutic antibodies as one of the major avenues in targeted therapies. For tuning the interaction of these antibodies with their antigens and immune receptors and leading to stronger effector cell activation or to the modulation of the antibody half-life in patients, several techniques have been developed. Today, many of the key limitations have been resolved, and antibody therapy is the most active field in therapeutics.

The concept of bispecific antibodies (BsAbs) has been around for nearly 30 years, and has taken on many different forms and formats. Bispecific antibodies combine the antigen-binding sites of two antibodies within a single molecule. Thus they are able to bind simultaneously two different epitopes and redirect effector cells toward therapeutic targets, either present on the same antigen or on different antigens. These molecules can limit complement activation, which is responsible for side effects in many therapeutic settings, and profoundly enhance target selectivity. BsAbs were used initially to direct lymphocyte effector cells to specific targets. Nowadays, BsAbs are primarily produced by three methods, quadroma technology based on the somatic fusion of two different hybridoma cell lines, chemical conjugation involving chemical cross-linkers, and genetic approaches utilizing recombinant DNA technology. BsAbs can be roughly divided into two categories, immunoglobulin G (IgG)-like molecules and non-IgG-like molecules (Fig. 1). IgG-like bsAbs keep Fc-mediated effector functions such as antibody-dependent cell mediated cytotoxicity (ADCC), complement-dependent cytotoxicity (CDC), and antibody-dependent cellular phagocytosis (ADCP). BsAbs in IgG-like formats usually have longer serum half-lives owing to their larger size and FcRn-mediated recycling. Non-IgG-like bsabs are smaller in size, leading to enhanced tissue penetration. There are several bsabs which aimed to cancer therapy approved by FDA. Bispecific antibodies can extend and improve therapeutic applications of monoclonal antibodies by combining target-specific binding with the recruitment of potent effector mechanisms. Bispecific antibodies have recently taken center stage as one arm of next-generation antibody therapeutics with a strong focus on effector cell retargeting and dual targeting strategies. 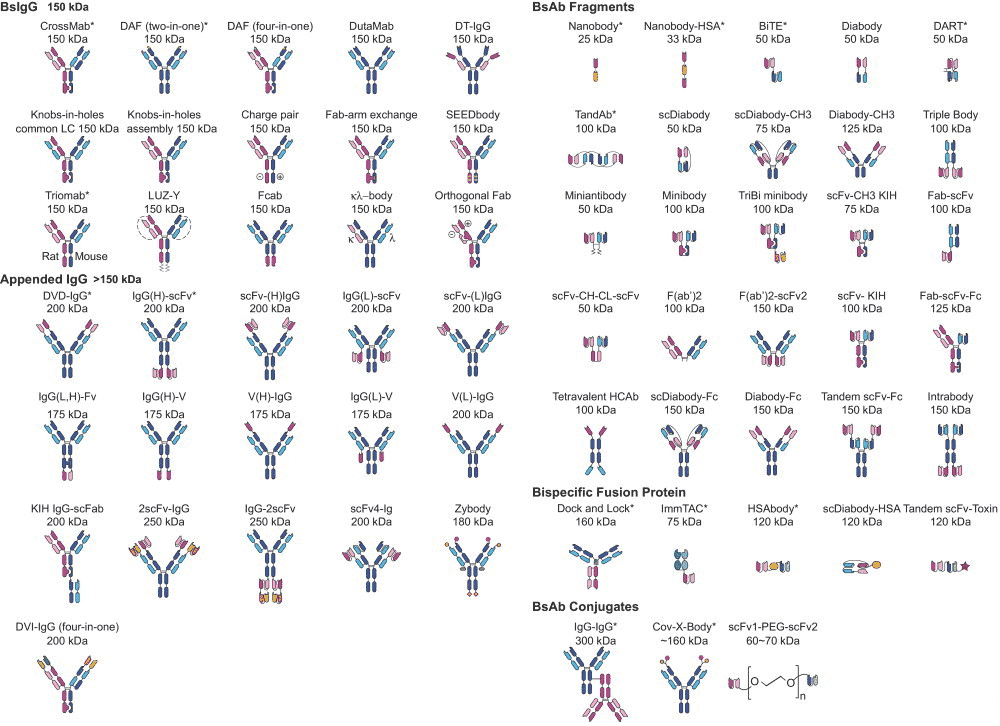 Antibody-drug conjugates (ADCs) are defined as antibodies to which other molecules are bound through a chemical linker. The term “conjugate” differentiates these modified antibody forms from peptide fusions that may be genetically fused to N- or C-termini of either the light or heavy chains of the antibody. The concept of antibody–drug conjugates (ADCs) is based on exploiting the high specificity of a monoclonal antibody toward a selected tumor cell-surface antigen and enhancing the cell-killing capacity of the antibody by attaching a highly cytotoxic agent. Typically, on average, three to six molecules of a highly potent cytotoxic compound are linked to each antibody molecule to enhance its activity, while retaining the favorable pharmacokinetic and pharmacodynamics properties of the antibody. In broad terms, there are six possible types of compound that have been linked to an antibody:

When constructing ADCs, the most important considerations include target selection, which includes tumor or tissue specificity and ability to internalize, internalization rate of the ADC, potency of the cytotoxic drug, ability to mute the cytotoxicity of the drug until it reaches its destination, stability of the linker between the antibody and the drug, drug-to-antibody ratio, and the effects of the linker conjugated drug on the antibody properties. The design and construction of ADC is so complicated that most pharmaceuticals need professional third parties to help them complete ADC projects. To date, only three ADCs have been approved by the U.S. Food and Drug Administration (FDA), gemtuzumab ozogamicin targeting CD33 for use in relapsed acute myelogenous leukemia (AML), brentuximab vedotin targeting CD30 for use in Hodgkin lymphoma and ALCL, and ado-trastuzumab emtansine targeting HER2 for use in metastatic breast cancer. ADCs have emerged as a new class of therapeutic agents in oncology, where there is increased focuses on targeted therapy as a means to minimize the toxic side effects of chemotherapy.

Engineered antibodies now represent over 30% of biopharmaceuticals in clinical trials, as highlighted by recent approvals from the US Food and Drug Administration (FDA). Potential clinical uses of engineered antibodies in therapeutics and diagnostics varies, including immunotherapy, targeted drug or cytotoxin delivery, effector cell retargeting, and fluorescent and radioimaging.

Radiolabeled antibodies are important clinical reagents for both tumor imaging and therapy and also provide an effective evaluation of pharmacokinetics. Aside from radioimmunotherapy, there are a variety of other clinical applications of engineered antibodies for viral infection, cancer, autoimmune disease, allograft rejection, asthma, stroke and glaucoma surgery. Specific clinical applications are discussed below.

Pathogen neutralization and antiviral therapy. Antibody binding with specific antigens can directly and effectively block the activity of many pathogens, often without requiring Fc-mediated cytotoxicity. The first monoclonal antibody for the treatment of viral disease, Synagis, approved by the FDA in 1998, is a humanized antibody used for the prevention of severe respiratory syncytial virus (RSV) disease.

Intracellular antibodies (Intrabodies). Intrabodies can serve several potential therapeutic functions, such as the binding and inactivation of viral proteins and oncogenes. Additionally, intrabodies can be expressed within mammalian cells and directed to specific organelles, where they could potentially alter the folding, interaction, modification, or subcellular localization of their target antigens. Obviously, the expression of intrabodies in vivo can be encoded into gene therapy vectors, and this could ultimately be their most powerful clinical application.

Cancer therapy. The promise of engineered antibodies for effective cancer therapy, especially radioconjugates, has been described earlier. Blocking angiogenesis to prevent the establishment and growth of tumors is becoming an important strategy.

With Ph.D. level scientists and over a decade of experience in antibody engineering, Creative Biolabs can provide all the engineered antibodies mentioned above to customers all over the world. These antibodies are for lab research use only, instead of diagnostic, therapeutic or any in vivo human use.