Briefly introduced the target and action mechanism of naptumomab estafenatox, as well as the existing clinical research project of the monoclonal antibody.

Naptumomab estafenatox, also known as ABR-217620 and ANYARA (Nap), is a recombinant fusion protein consisting of the antigen-binding fragment of a monoclonal antibody directed towards the tumor-associated oncofetal trophoblast glycoprotein antigen 5T4 attached to a mutated form of superantigen staphylococcal enterotoxin E (SEA/E-120), with immunomodulating and antineoplastic activities. The drug has been used in trials studying the treatment of Pancreatic Cancer, Renal Cell Carcinoma, and Non-Small-Cell Lung Carcinoma. Naptumomab estafenatox has been evaluated in clinical phase 1 and 2/3 studies. Some research reports indicate there were no hypersensitivity reactions or clinically significant hematologic toxicity from naptumomab estafenatox. Naptumomab estafenatox was mildly to moderately immunogenic, although not in all patients, and it was possible to administer multiple cycles safely. In addition, the drug can be safely administered to patients with advanced malignancies at doses of 22 μg/kg in patients with NSCLC and PC and 15 μg/kg in patients with RCC. In conclusion, naptumomab estafenatox has a much-reduced binding to preformed antibodies, lower toxicity, higher affinity for the target antigen, and improved tumor cell–killing properties as compared with its predecessor immunotoxin.

Renal cell carcinoma (RCC) accounts for 2–3% of all new cancer cases. The clear cell RCC is the most common subtype and accounts for 70–80% of all renal cancers. Although RCC is resistant to classic chemotherapy, development of new therapies including tyrosine kinase inhibitors has improved the median survival period of patients with advanced RCC to about 26 months. Improvement of therapy of RCC by introducing new concepts is still urgent though. Immunotherapy is well on the way to becoming an established tool in the cancer treatment armory and RCC is regarded as a sensitive tumour type. Antibody targeting of superantigens to tumour cells combines powerful T cell activation and cytotoxicity with a targeted approach to eradicate tumour cells. Tumour targeted superantigens (TTS) are recombinant fusion proteins that consist of an anti-tumour Fab moiety genetically fused to a superantigen. TTS treat tumours via the local activation of the patient's cytotoxic T cells through a process termed Superantigen Antibody Dependent Cellular Cytotoxicity (SADCC). The immunotoxin naptumomab estafenatox was developed in an effort to activate and target the patient’s own T cells to their tumor, by fusing a superantigen (SAg) variant that activates T lymphocytes to the Fab moiety of a tumor-reactive monoclonal antibody. Naptumomab estafenatox targets the 5T4 tumor antigen, a 72-kDa oncofetal trophoblast protein expressed on many carcinomas, including renal cell carcinoma. The therapeutic effect is associated with activation of SAg-binding T cells. The SAg-binding T lymphocytes expand, differentiate to effector cells, and infiltrate the tumor. The therapeutic efficacy is most likely related to the dual mechanism of tumor cell killing: (1) direct lysis by cytotoxic T lymphocytes of tumor cells expressing the antigen recognized by the antibody moiety of the fusion protein and (2) secretion of cytokines eliminating antigen-negative tumor cell variants. 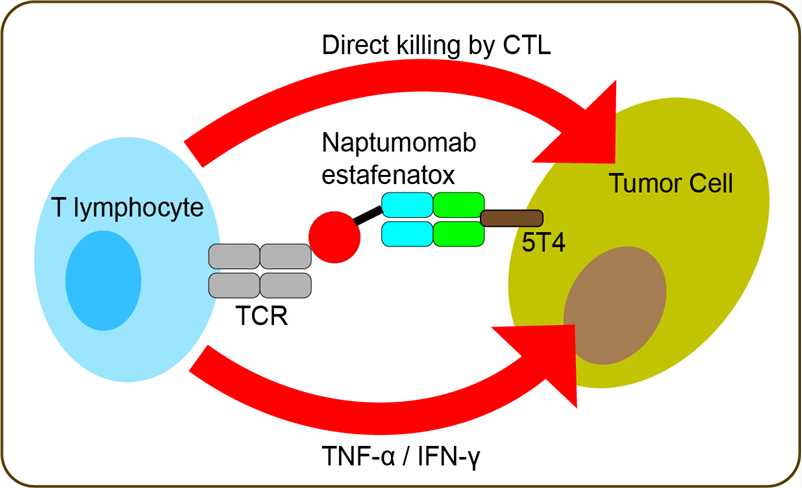