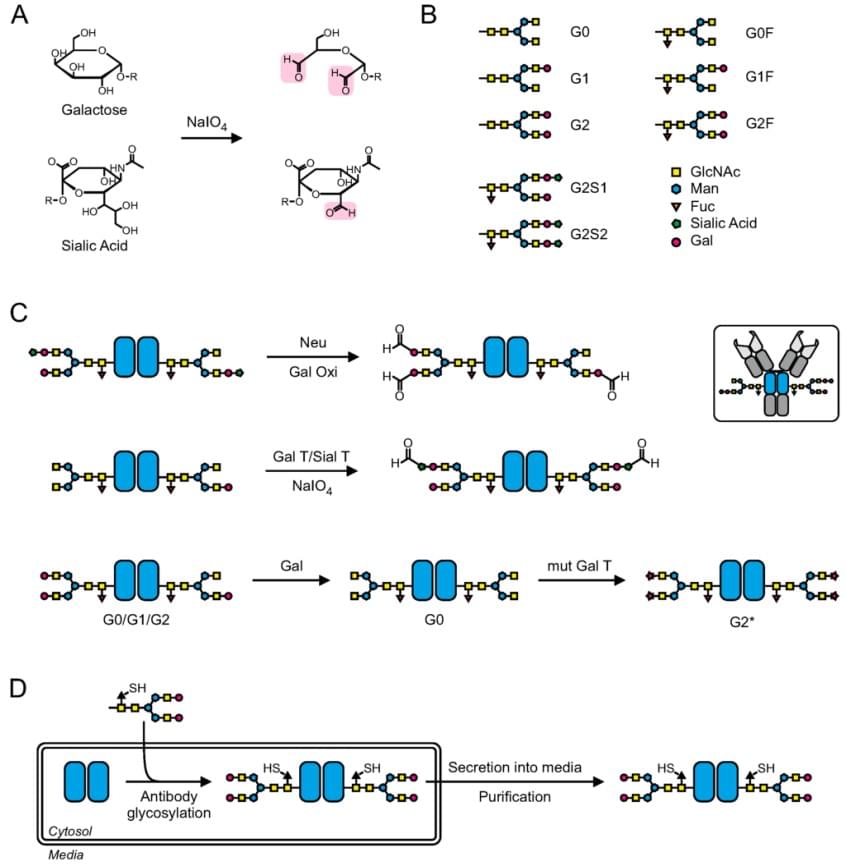 The native glycans attaching to Asn-297 located in the Fc domain are alternative sites to conjugate drugs. In the strategy of carbohydrate-based conjugation, the first step is usually to introduce new bioorthogonal functionalities to facilitate conjugation of the antibody to a drug. There are different strategies that can be used to introduce bioorthogonal functionalities onto the carbohydrate moiety for bioconjugation (glyco-conjugation), among which the following three are the most widely used: chemical oxidation of glycans; enzymatic and chemo-enzymatic modification of glycans; metabolic engineering of the carbohydrate moiety. As shown in the figure, classical chemical approaches use sodium periodate (NaIO4) to oxidize cis-glycol groups of e.g., galactose or sialic acid to generate aldehydes (Fig. A,B), which can be then coupled with hydrazide- or primary amine functionalized molecules to create acid-labeled hydrazones or with aminooxy groups to form oximes. Enzymatic and chemo-enzymatic approaches are newly established based on traditional methods, which treat the sugar residue with neuraminidase (Neu) and galactose oxidase (Gal Oxi) to formate aldehyde functionalities. Continuous treatment of the antibody with β1,4-galactosyltransferase (Gal T)/α2,6-sialyltransferase (Sial T) can yield homogeneously sialylated antibodies. Then the resulting antibodies can be selectively oxidized to the corresponding aldehyde functionalities and if sialic acid derivatives are used, these antibodies can be used as selective bioorthogonal handle. Similarity, more recently, there is a method to introduce non-natural galactose derivatives. In this method, the antibody is treated with β-galactosidase (Gal) and a mutant Gal T (can mediate the attachment of bioorthogonal azide- or keto-galactoses) to generate homogeneous G2 glycan patterns which possess non-natural functionalities (Fig. C). The third method makes it possible that non-canonical thio-fucose derivatives can be incorporated into the glycan of antibodies by feeding the cells with the bioorthogonal sugar generating expressed antibodies that display thiol functionalities (Fig. D).

There are various strategies used for antibody modification and conjugation: