Enzymatically cleavable linkers have superior plasma stability and release mechaniam, which make them gain significant attention in ADC development. Creative Biolabs offers two classes of enzymatically cleavable linkers, peptide linkers and β-glucuronide linkers, to conjugate antibody and drugs. We have been dedicating ourselves to helping every custom to facilitate their project in a highly productive and cost-effective way. 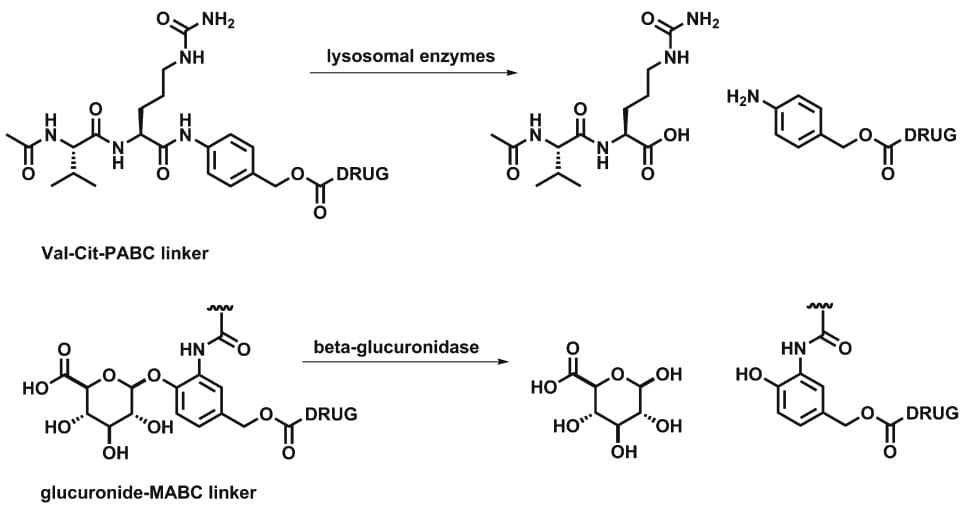 As one of the new generation linkers, enzymatically cleavable linkers provide ADCs with improved plasma stability characteristics comparable to that of non-cleavable linkers while boasting a more defined method of drug release. Moreover, the ability to pair these linkers with self-immolative chemical groups bestows the release of free drugs with minimal derivation. There are numerous ADCs in clinical trials that use enzymatically cleavable linkers, such as dipeptide-based linkers Val-Cit and Phe-Lys. Moreover the dipeptide valine-citrulline combined with PAB (p-aminobenzyl alcohol), a self-immolative linker, is the most popular enzymatic cleavage sequence. Cleavage of an amide-linked PAB triggers a 1, 6-elimination of carbon dioxide and concomitant release of the free drug in parent amine form. Besides peptide linkers, some non-peptide cleavable linkers are also been investigated, such as glucuronide linkers which incorporate a hydrophilic sugar group cleaved by b-glucuronidase. Once the sugar is cleaved from the phenolic backbone, self-immolation of the PAB group releases the free drug. At first, this linker was used to conjugate MMAE, MMAF, and doxorubicin propyloxazoline to various antibodies to create ADCs. Enzymatically cleavable linkers provide ADCs with high stabilities and defined methods to release drugs. These characteristics make them be excellent linkers in ADC development.

So how to choose enzymatically cleavable linkers: peptide linkers or β-glucuronide linkers?  There was an evaluation between glucuronide- and Val-Cit-PAB-linked ADCs for aggregation and efficacy. The glucuronide-linked conjugates showed minimal aggregation and greater efficacy in vivo compared to dipeptide-linked conjugates. The two ADCs had similar efficacy in vitro, but the glucuronide-linked ADC was not well tolerated in vivo compared to Val-Cit-PAB. However, there is no general guideline for linker selection although great advances have been made in the development of the linker technology for ADCs, Creative Biolabs provides customized-design services for cleavable linkers depending on the antibody, drug and tumor target, we will design and select the most suited linker evaluated based on efficacy and toxicity of an individual ADC construct.