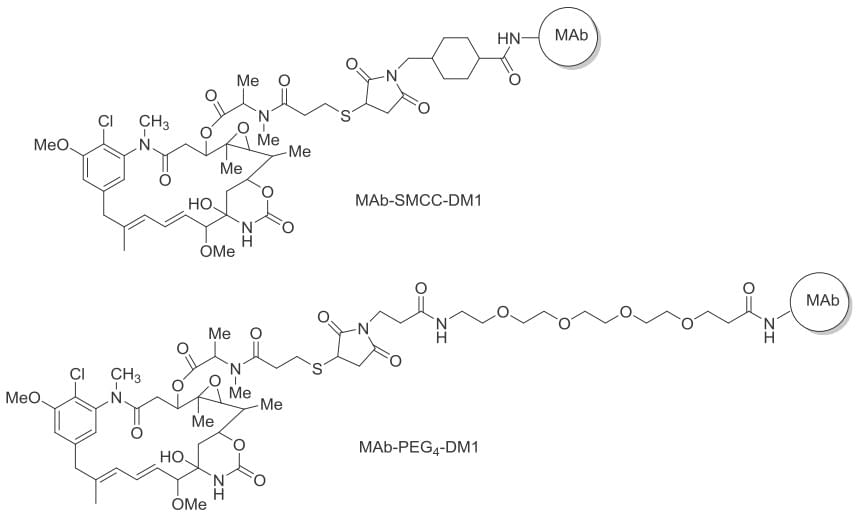 In ADC development, several noncleavable alkyl and polymeric linkers have been explored. Among these, MCC amine-to-sulfhydryl bifunctional cross-linker featured in T-DM1 is a notable successful case. This linker is especially useful as the cyclohexane ring provides steric hindrance that decreases the rate of hydrolysis of the resulting thioether. Up to present, the most commonly used noncleavable linkages are succinimide-thioether bonds, which are formed by the reaction of maleimids with thiols. Noncleavable linkers have been used to prepare antibody conjugates of maytansinoids and auristatins. For the ADCs of noncleavable linkers, the cytotoxic drug is released after ADC internalization via antigen-mediated endocytosis. After internalization, ADC is delivered to lysosomal compartment, where the antibody is degraded to the level amino acids through intracellular proteolytic degradation. So, ADCs with noncleavable linkers are more dependent on the biology of the target cell compared to cleavable linkers. Moreover, these ADCs have improved therapeutic index due to their greater stability. The most advantage of using non-cleavable linkers is their increased plasma stability when compared to many cleavable linkers. Despite the limited “bystander” effect, the resistance to cleavage outside of target cells may actually increase the specificity of drug release. For example, some in vivo studies and clinical data have shown that non-cleavable linked ADCs outperform their cleavable counterparts in vivo.

In order to release active drug, non-cleavable linkers require mAb degradation within the lysosome after ADC internalization. As this mechanism, differences between parent drug and potential ADC metabolites must be taken into consideration. For example, MMAE, a protein-based anti-mitotic drug, is most potent in its native form and is therefore poorly suited for derivatization with non-cleavable linkers. Conversely, MMAF retained its potency even when linked with a simple alkyl chain in vitro and in vivo. One proposed mechanism for the decreased efficacy of non-cleavable linked ADCs is that drugs bearing charged amino acids always suffer from decreased membrane permeability, limiting their ability to kill nearby cells. Therefore, a major motivation for employing cleavable linkers is to improve this “bystander” effect. Although great advances have been made in the development of the linker technology for ADCs, there is no general guideline for linker selection. Creative Biolabs provides customized-design services for noncleavable linkers depending on the antibody, drug and tumor target, we will design and select the most suited linker evaluated based on efficacy and toxicity of an individual ADC construct.