Standing on the giant’s shoulder, the Magic™ Escherichia coli Expression Service of Creative Biolabs has established a superior protein expression platform expressing and isolating numerous heterologous biopharmaceutical proteins for basic research purposes and further applications. Our platform possesses the most flexible systems, such as a library composed of numerous plasmids with all suitable promoters, tags, multiple cloning regions, codon optimization of the target gene, low-cost culture strategies, multiple purification procedures by various chromatography columns. Meanwhile, the downstream modifications and refolding of inclusion body are also greatly supported by our platform. There is no doubt that the Magic™ Escherichia coli Expression Service is capable of providing the magical biopharmaceutical products with superior efficiency and productivity in the world, especially for the large-scale production.

The Introduction and Application of Escherichia coli Expression

As the creative researchers developed the genetic engineering and clone technology, the whole world was excited about numerous chances of biologically production and purification of heterologous proteins for multiple purposes. As a star microorganism, Escherichia coli (E. coli) is extremely easy to manipulate, maintain, culture, and ferment in a relatively cheap medium. Meanwhile, it is able to grow exponentially in a considerably short time and accumulate a great amount of heterologous protein either in the cell or secret into the periplasmic space. Thus, further research clearly accumulated ample information about this mysterious bacterium, including its whole genome, genetic manipulation mechanisms, and physiology. In addition to the swift and straightforward adaptation to a scale-up fermentation, this incredible microorganism achieves a historical success than other expression systems. Although the E. coli possesses a vicious drawback of the endotoxin, it still manifests several great advantages for recombinant protein (valuable enzymes, various antibodies, vaccines, functional peptides, etc.) expression in every range of scales. Thus, the tiny incredible microorganism acts as a rapid and simple cell factory benefiting the whole world constantly. 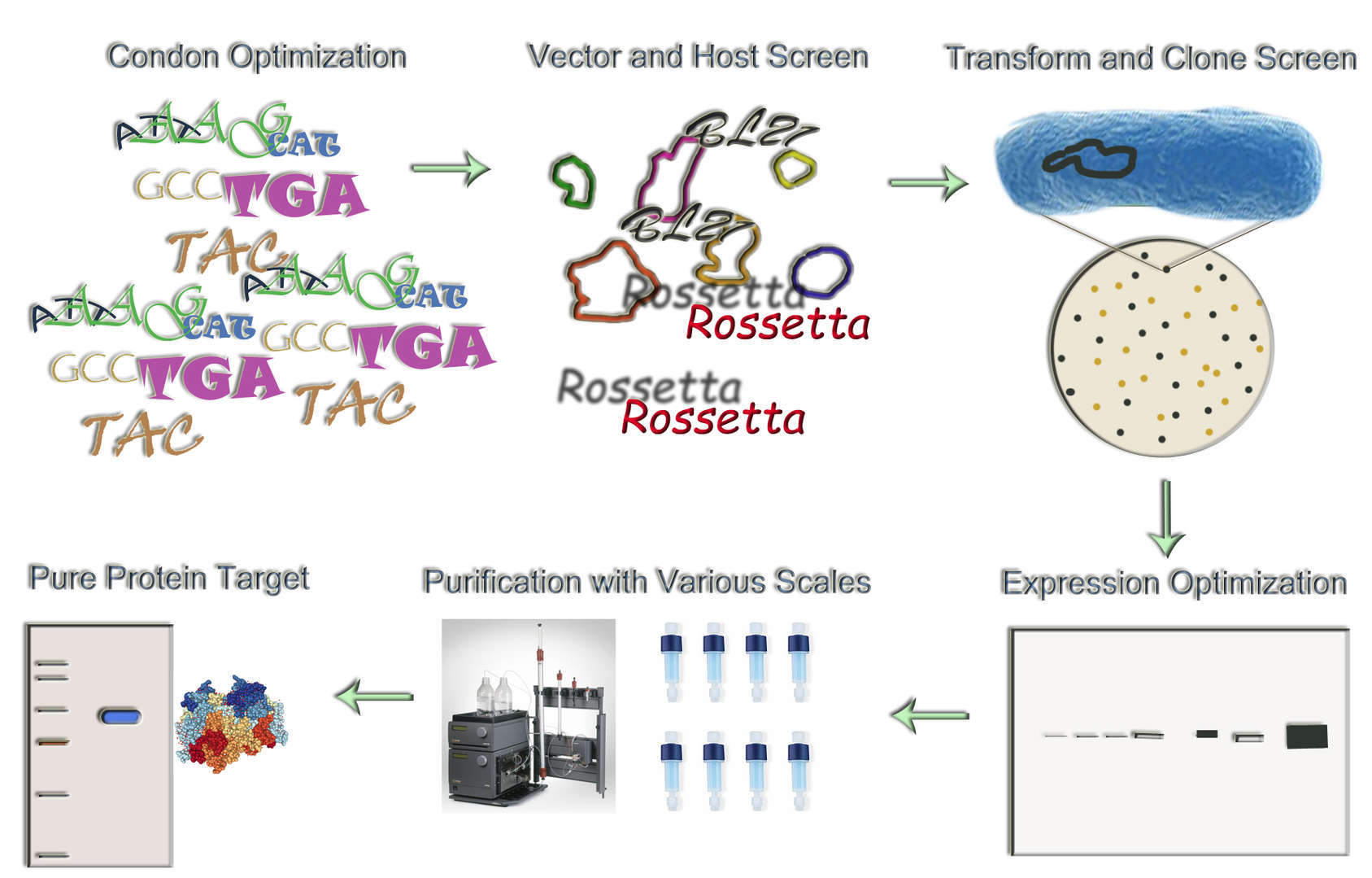 Starting with a library composed of numerous expression plasmids and almost all engineered strains, our scientists professionally design an optimal cultivation and induction (Sugar-inducible, Nutrient Depletion-inducible, and IPTG-inducible) strategy for success expression according to the specific regulatory mechanism and convenience of the downstream purification. Subsequent high throughput cloning screen acquires several most adapted clones with the highest yields and bioactivities. A fed-batch fermentation of the chosen clones produces varying amounts of target protein according to the scale requirement. Given our optimal recovery technique for inclusion body and the efficient purification platform, a superior quality and quantity of target protein will be achieved. Meanwhile, the purified product is going to be extensively evaluated with multiple critical parameters further. Eventually, our Magic™ Escherichia coli Expression Service provides researchers with the superior proteins (antibodies, enzymes, vaccines, etc.) in the world.