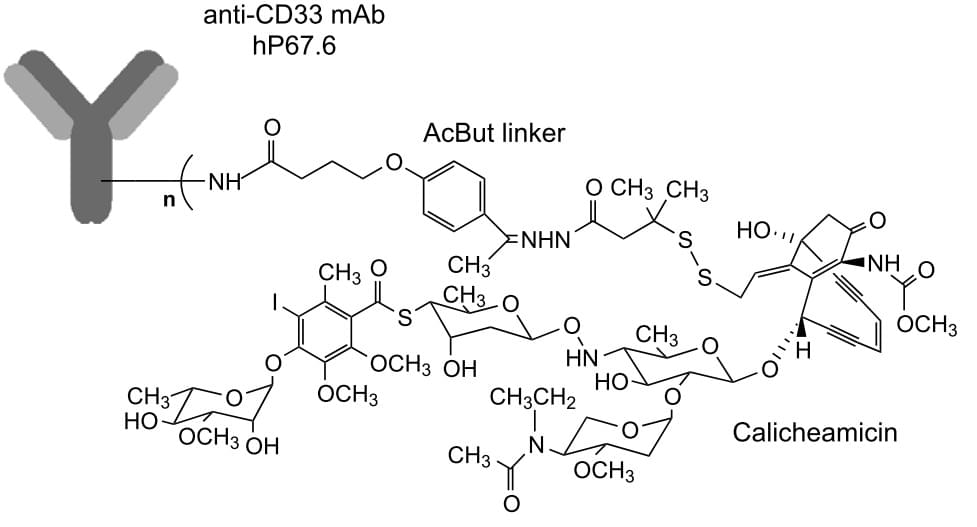 Calicheamicins are a family of molecules with similar structure that binds to the minor grove of DNA in a relatively sequence-specific manner. They are produced by prokaryotic microorganisms and contain enediyne moiety, which is structurally similar to other enediynes such as esperamicins, neocarzinostatin, kedarcidin, etc. After reduction by cellular thiols, the enediyne moiety of calicheamicins begins to rearrange to form a 1, 4-benzenoid diradical that abstracts hydrogens from the phosphodiester backbone of DNA, initiating double-strand scission. Since it is difficult to repair double-strand DNA breaks, the DNA damage will result in cellular apoptosis and death. Gamma calicheamicin is a major representative. In vitro, calicheamicin γ1 induces DNA double-strand break (DSB). The efficient DSB induction is based on that calicheamicin γ1 has two radical centers being close to the backbone when calicheamicin γ1 binds to the minor groove of double-stranded DNA. Among various calicheamicins, calicheamicin γ1I is the most widely studied. It contains an aglycon consisting of bicycle tridec-9-ene-2, 6-diyne system with a labile methyl trisulﬁde grouping and an aryltetrasaccharide chain. Calicheamicin γ1I, along with other iodinated and bromine-containing (α2I, α3I, β1I, δ1I, β1Br, γ1Br) analogs can be obtained from M. echinospora ssp. calichensis fermentation broth with different composition. In gemtuzumab ozogamicin (shown in the figure), one of the ADCs approved by FDA, N-acetyl gamma calicheamicin dimethyl hydrazide, a derivative of gamma calicheamicin, a methyl trisulﬁde, is used as the cytotoxic agent to conjugate with a humanized anti-CD33 monoclonal. Gemtuzumab ozogamicin is an active therapeutic agent and has been proved to be efficient in some AML patients.  Additionally, calicheamicins are relatively small molecules combined with high potency, which make them the good candidates in ADC development.