Creative Biolabs provides custom services for the development of antibody conjugates with Taxoids. 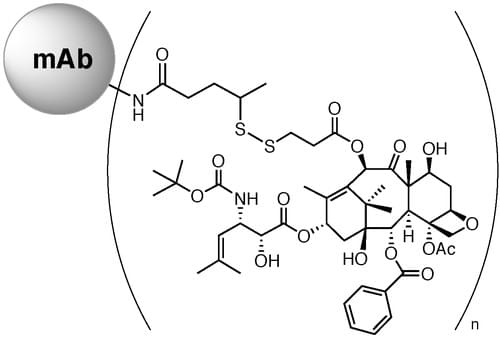 The taxoids, such as paclitaxel (Taxol) and docetaxel (Taxotere), are widely researched and used antineoplastic drugs. They share a similar mechanism of action, which is promoting microtubule assembly and inhibiting disassembly. Paclitaxel (Taxol) and docetaxel (Taxotere) are taxane-containing regimens. Paclitaxel (Taxol) is a complex diterpene which has a taxane ring with a four-membered oxetane ring and an ester side chain at position C-13. It has a unique binding site on the microtubule polymer, interacting with microtubules directly and enhancing tubulin polymerization. In the presence of paclitaxel, microtubule is recognized and cells are blocked in the G2/M phase due to the activation of the spindle assembly checkpoint (SAC, also known as mitotic checkpoint or M-phase checkpoint). Docetaxel (Taxotere) is also a microtubule-stabilizing taxane. Compared to paclitaxel, docetaxel has approved characteristics including higher affinity to tubulin and increased antitumor activity. Additionally, docetaxel has longer half-life, longer intracellular retention and a faster cellular uptake. As is reported, docetaxel is the only drug which has superiority over anthracycline therapy. Both paclitaxel and docetaxel have brought signiﬁcant impact on the current cancer chemotherapy and are effective against breast, ovary, and lung cancers. However, the lack of tumor speciﬁcity and multidrug resistance (MDR) lead to systemic toxicity, causing undesirable severe side effects, such as damage to the liver, kidney, and bone marrow. So it is an alternative strategy to investigate tumor-targeting drug-delivery system. Up to now, taxoids have been used in various conjugates with different tumor-targeting modules including polyunsaturated fatty acids (PUFAs) and monoclonal antibodies, etc. A series of synthesized taxoid-monoclonal antibody conjugates possess remarkable target-specific antitumor activity and result in complete inhibition of tumor growth in treated mice.
Creative Biolabs can provide various small molecules including taxoids to conjugate with monoclonal antibodies to reach improved antitumor efficacy.