The Introduction and Application of Filamentous Fungus Expression

As the widely used hosts in industry, several filamentous fungi have been successfully cultured for producing multiple small-molecule metabolites, such as penicillin, Lovastatin, citric acid, etc. Many of these molecules have greatly honored as the most historical discoveries because of numerous lives saved and better health guarded by them not only in the past but also the current and the future. Along with the growth of our science, the fabulous secreting ability of the filamentous fungi has been discovered with a great expectation for recombinant expression of high-value biopharmaceuticals. Astonishingly, the current industrial strains are able to reach almost 100 g/L of homologous proteins with optimized fermentation parameters. Although the current records of heterologous targets are only several grams per liter, the scientific realm believes that these tiny organisms hold an ultimate potential for recombinant proteins on a fabulous industrial scale far better than any other hosts.

The scientists of Creative Biolabs have studied these unbelievable scavengers of recalcitrant polymers for the full potential of expressing and secreting recombinant antibodies and other proteins outside the growing hyphae (mainly at the tip and sub-apical regions). Starting with optimizing the codon usage, our service takes every available advantage of the internal protein quality control mechanism, secretion stress, secretory pathway, and post-translational protein modification to achieve high yield and bioactivity as a routine strategy of filamentous fungi. Practically, we perform excellent screening of high-yield strains for further cultivation. Moreover, our service greatly increases correct folding by co-expression of cellular chaperones. Meanwhile, we adopt weaker promoters to avoid host stress due to strong promoters. Although the fungus lacks the functional sialylation of the glycans, our service is making a great effort to bypass this disadvantage by our diligent scientists. Undoubtedly, the Magic™ Filamentous Fungus Expression Service ranks the first-rate expression service of filamentous fungi through our well-designed novel strategies composed of the constant exploration of the usable metabolic pathways and sophisticated fermentation optimization. 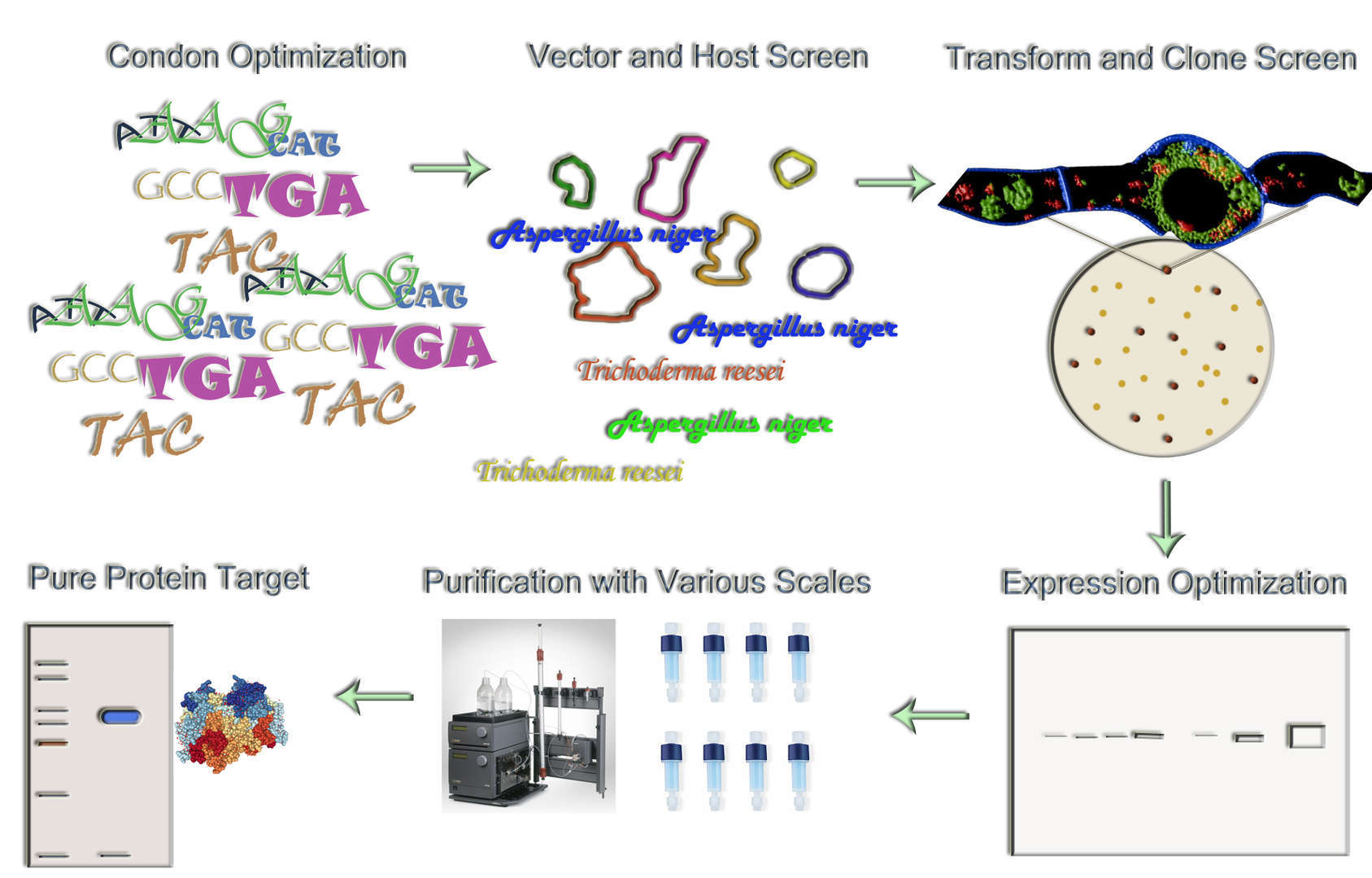 Standing on the former researchers’ shoulder, the Magic™ Filamentous Fungus Expression Service possesses a library of suitable species of filamentous fungi, such as the most widely used cellulolytic Trichoderma reesei and Aspergillus niger. And we have successfully produced multiple protein targets, especially the therapeutic antibodies, with superior quantity and excellent bioactivity. Do not hesitate, contact us now for more information.