Creative Biolabs summarizes a short overview of Cantuzumab Mertansine, which consists of definition, mechanism of action, and clinical projects.

Cantuzumab mertansine (huC242-DM1) is a tumor-activated prodrug developed by ImmunoGen. It is the conjugated product of up to four molecules of the potent maytansinoid anti-microtubule agent DM1 and the humanized monoclonal antibody (mAb) huC242. HuC242 demonstrates specific binding to the extracellular domain of the tumor-associated carbohydrate antigen known as CanAg (a novel glycoform of MUC1), which is strongly expressed in most pancreatic, biliary, and colorectal cancers. It is also expressed in a substantial proportion of gastric cancers (55%), uterine cancers (45%), non-small cell lung cancers (40%), and bladder cancers (40%), whereas normal tissues stain for this antigen only minimally. DM1 is a derivative of the potent anti-microtubule agent maytansine, synthesized from the maytansinoid fermentation product ansamitocin P-3. Maytansine was associated with significant toxicities, namely nausea, vomiting, diarrhea, elevations of liver function tests, lethargy, and peripheral neuropathy. Both complete and partial responses were seen, however, in patients with thymoma, non-Hodgkin’s lymphoma (NHL), melanoma, acute lymphocytic leukemia, ovarian cancer, and breast cancer. Given the early evidence of activity in a variety of human tumors as well as substantial toxicity, maytansine was felt to be appropriate for conjugation to tumor-specific monoclonal antibodies in an effort to improve its therapeutic index. Cantuzumab mertansine has broad activity against a range of CanAg-positive human tumor xenografts.

The CanAg tumor antigen is a novel glycoform of mucin 1 (MUC1; also known as episialin, PEM, H23Ag, EMA, CA15-3, and MCA), which is a single pass type I transmembrane protein with a heavily glycosylated extracellular domain. MUC1 is normally expressed in the glandular or luminal epithelial cells of the mammary gland, esophagus, stomach, duodenum, pancreas, uterus, prostate, and lungs, and to a lesser extent, in hematopoietic cells. MUC1 serves a protective function by binding to pathogens and also functions in a cell signaling capacity. In the cell nucleus, the protein MUC1 regulates the activity of transcription factor complexes that have a documented role in tumor-induced changes of host immunity. Overexpression, aberrant intracellular localization, and changes in glycosylation of this protein have been associated with carcinomas. Aberrantly glycosylated MUC1 is overexpressed in most human epithelial cancers and has gained remarkable attention as an oncogenic molecule. Tumor-associated MUC1 (TA-MUC1) differs from that expressed in normal cells, both in its biochemical features and its cellular distribution. HuC242 binds to the extracellular domain of the CanAg tumor antigen. After the binding, the cantuzumab mertansine-CanAg complex is internalized via endocytosis, and the DM1 molecules are released intracellularly by cleavage of the DM1-huC242 disulfide bonds. Intracellularly, DM1 is separated from the antibody by lysosomal degradation and inhibits the assembly of microtubules by binding to tubulin (at the rhizoxin binding site). This disrupts the microtubules causing cell cycle arrest and apoptosis. While huC242 is utilized to deliver DM1 to the cell, it also retains its properties of ADCC, which may result in the inhibition of MUC1-mediated signaling pathways. 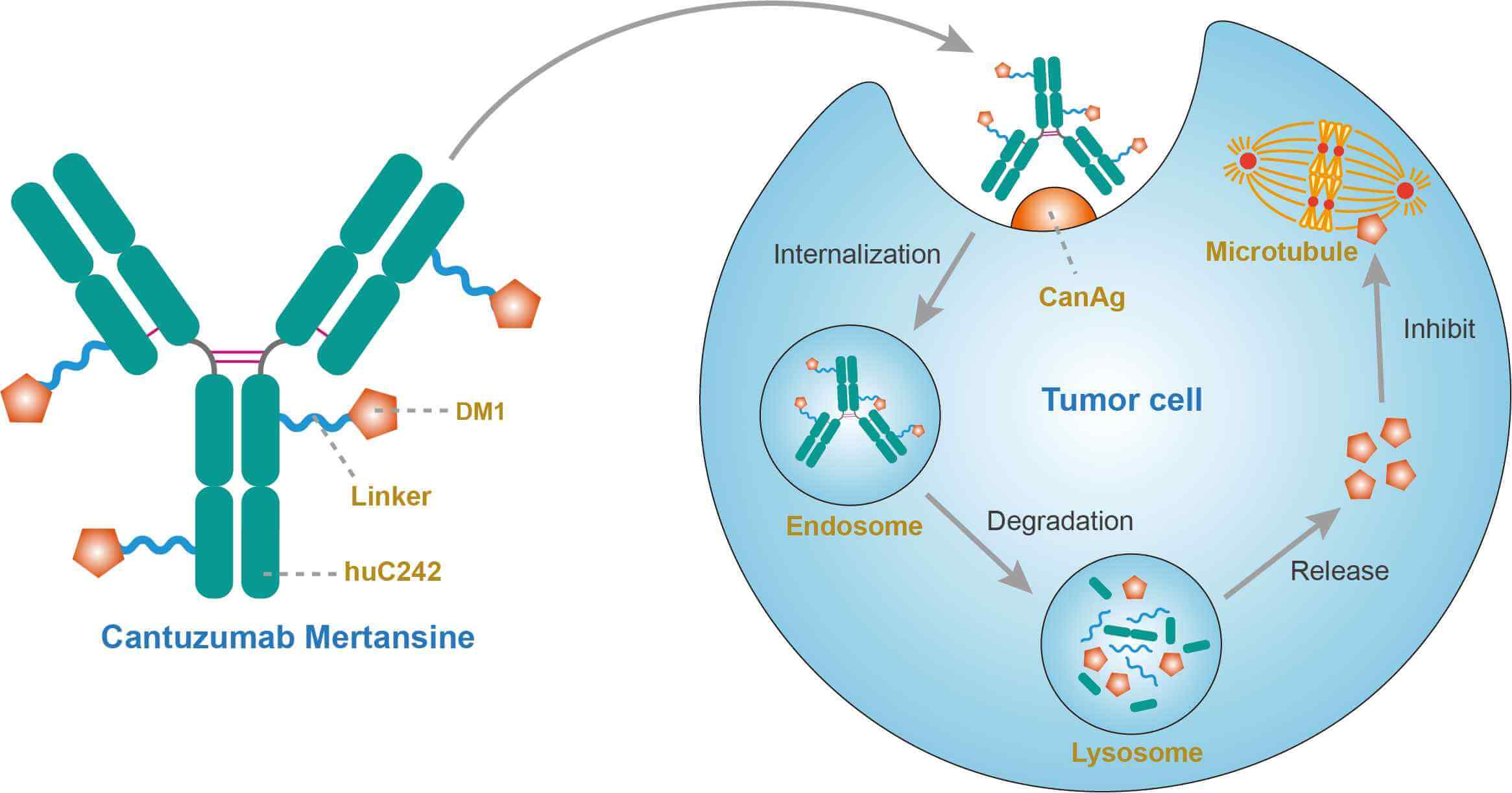 We provide high-quality (IgG1κ type) for use in IP, IF, FuncS, FC, Neut, ELISA, ICC and most other immunological methods. For lab research use only, not for diagnostic, therapeutic or any in vivo human use.