Creative Biolabs summarizes a short overview of Sevirumab, which consists of definition, mechanism of action, and clinical projects.

Sevirumab (trade name Protovir), also known as MSL-109, EV2 7, SDZ MSL 109, is a human anti-cytomegalovirus (CMV) monoclonal antibody directed to a conformational epitope of the envelope glycoprotein H (gH). In 1993, Novartis who originally developed sevirumab, licensed North American and Asian rights to Protein Design Laboratories. Novartis and Protein Design Laboratories share certain copromotion and co-marketing rights in these countries. The compound was exclusively licensed to Corange (Boehringer Mannheim) for Europe and the rest of the world; however, rights have now returned to Protein Design Labs. Phase II trials for CMV retinitis have been completed in Switzerland and the US. A further phase II study, sponsored by the National Institute of Allergy and Infectious Diseases AIDS Clinical Trials Group (ACTG), has been halted as the use of higher doses of sevirumab were indicated. The study, which was evaluating sevirumab as an adjunctive treatment to ganciclovir or foscarnet in AIDS patients with newly diagnosed CMV retinitis, had enrolled approximately half of the anticipated 167 patients. A phase II/III study being conducted by the Studies of the Ocular Complications of AIDS (SOCA), a study group affiliated to the National Eye Institute in the US, was also halted because of lack of efficacy.

Mechanism of Action of Sevirumab

Human CMV is a β-group herpesvirus that causes severe complications in immunocompromised individuals. CMV infects between 60% and 80% of the adult population worldwide. As with other herpesviruses, CMV establishes a lifelong latency in the host but is largely asymptomatic among infected immunocompetent individuals. However, during severe immunosuppression, CMV reactivation or primary infection can result in life-threatening disease. The current therapy for CMV disease is treatment with either ganciclovir or valganciclovir, which are associated with significant toxicity and not approved for use in pregnant women or for congenitally damaged infants. Like other herpesviruses, CMV uses multiprotein entry complexes to initiate infection of host cells. Three glycoproteins, gB, gH, and gL, known as the “core fusion machinery,” are conserved in all herpesviruses and are required for entry. The crystal structure of gH has been determined, and although the overall protein sequence conservation is low, the core structure of gH is conserved. gH has three distinct domains: the N-terminal domain that binds gL (domain H1), the central helical domain (domain H2), and the C-terminal β-sandwich domain (domain H3). Domain H1 is the most divergent, whereas domains H2 and H3 are more conserved and present the same fold in gH. Sevirumab is a human monoclonal IgG originally isolated from spleen cells of a CMV seropositive individual. Sevirumab recognizes CMV gH complexes, and in vitro, blocks the infection of fibroblasts by laboratory and clinical strains of CMV. Sevirumab has been evaluated in the clinic for the prevention of CMV infection following allogeneic hematopoietic stem cell transplantation and as adjuvant therapy for CMV retinitis in HIV-infected individuals. Although sevirumab did not demonstrate benefit in all-comers, analysis of a subset of the transplantation patients who were at high risk for primary CMV infection demonstrated that sevirumab could confer protection. In addition, sevirumab failed to demonstrate efficacy in HIV patients with CMV retinitis, possibly because of the immune-privileged nature of the eye. Ultimately, sevirumab was not developed further. A recent study demonstrated a nongenetic viral resistance to sevirumab in vitro and suggested that the clinical failure of sevirumab was because of this novel mechanism of resistance. 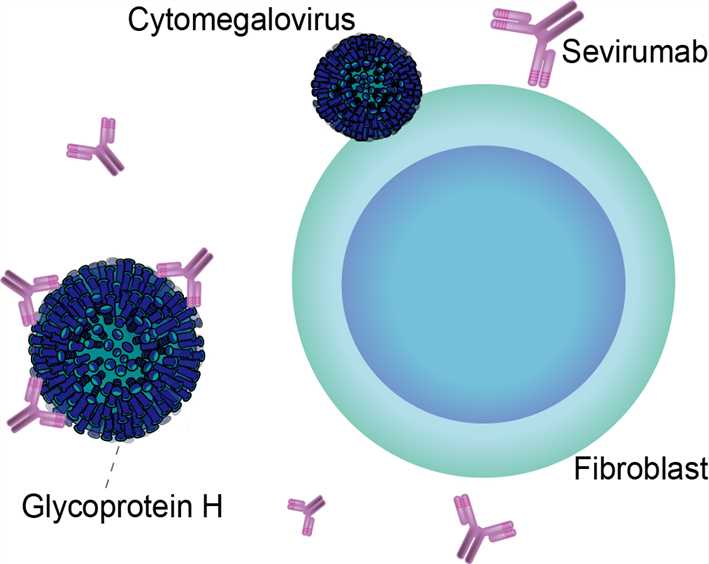 Fig 1. Mechanism of Action of Sevirumab