Blosozumab is an IgG4-kappa type mouse monoclonal antibody optimized by humanization engineering with a molecular weight of 144.63 kDa. The monoclonal antibody was developed by Eli Lilly for the treatment of osteoporosis. Blosozumab can target and bind sclerostin (SOST) to play a biological role. In 2014, blosozumab was conducted a different doses of clinical trial about blosozumab was conducted to evaluate including drug safety, tolerance, pharmacokinetics and pharmacodynamics in postmenopausal women. The results showed that blosozumab had well tolerance and anabolic effect on bone, which could be used as a potential treatment for osteoporosis. In 2015, a randomized double-blind phase Ⅱ trial of blosozumab in postmenopausal women with low bone mineral density showed that blosozumab treatment resulted in a significant dose-dependent increase in bone mineral density, which further supports the conclusion that blosozumab is a potential anabolic therapy for osteoporosis. In September of the same year, women who had completed treatment were followed up to evaluate the effect of discontinuation of blosozumab. It was found that there were no adverse events related to the treatment one year after the cessation of treatment, and the anti-drug antibodies in the patients generally decreased.

Mechanism of Action of Blosozumab

Blosozumab affects bone mineral density by interacting with SOST. SOST, also known as sclerostin protein, is a secretory glycoprotein. SOST, a negative regulator of bone formation, is specifically expressed in osteoblasts, and plays an important role in bone metabolism by acting on osteoblasts. It has been found that the effects of sclerostin protein on bone metabolism include inhibiting bone formation, inhibiting bone cell differentiation or mineralization, and participating in the response of bone tissue to stress. The mechanism of sclerostin protein involved in the regulation of bone metabolism may be related to wnt/β-chain protein signaling pathway, bone morphogenetic protein (BMP) signaling pathway, MAPK signaling pathway and so on. Blosozumab relieves the symptoms of osteoporosis by antagonizing SOST, which provides a new method for the clinical treatment of osteoporosis. 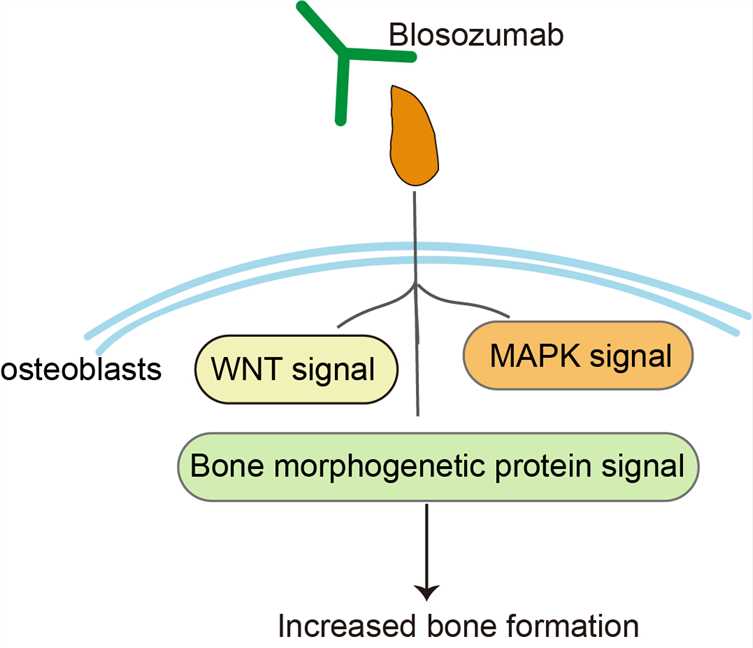 Fig.1 Mechanism of action of Blosozumab