Cancer is one of the most dreaded diseases of the 20th century and spreading further with continuance and increasing incidence in the 21st century. What is cancer? Put simply; cancer is the abnormal growth of cells. Cancers arise from any organ or body structure and are composed of tiny cells that have lost the ability to stop growing. Occasionally, cancer may be detected “incidentally” by a laboratory test or radiological routine test or for an entirely different reason. In general, cancer must reach a size of 1 cm, or be comprised of 1 million cells, before it is detected. At this point, it may be referred to as a “'mass,” a “growth,” a “tumor,” a “nodule,” a “lump,” or a “lesion.” Exceptions to this general rule include cancers of the blood and bone marrow (leukemia's and lymphomas) – which frequently do not produce a “mass,” but will be evident on laboratory tests. 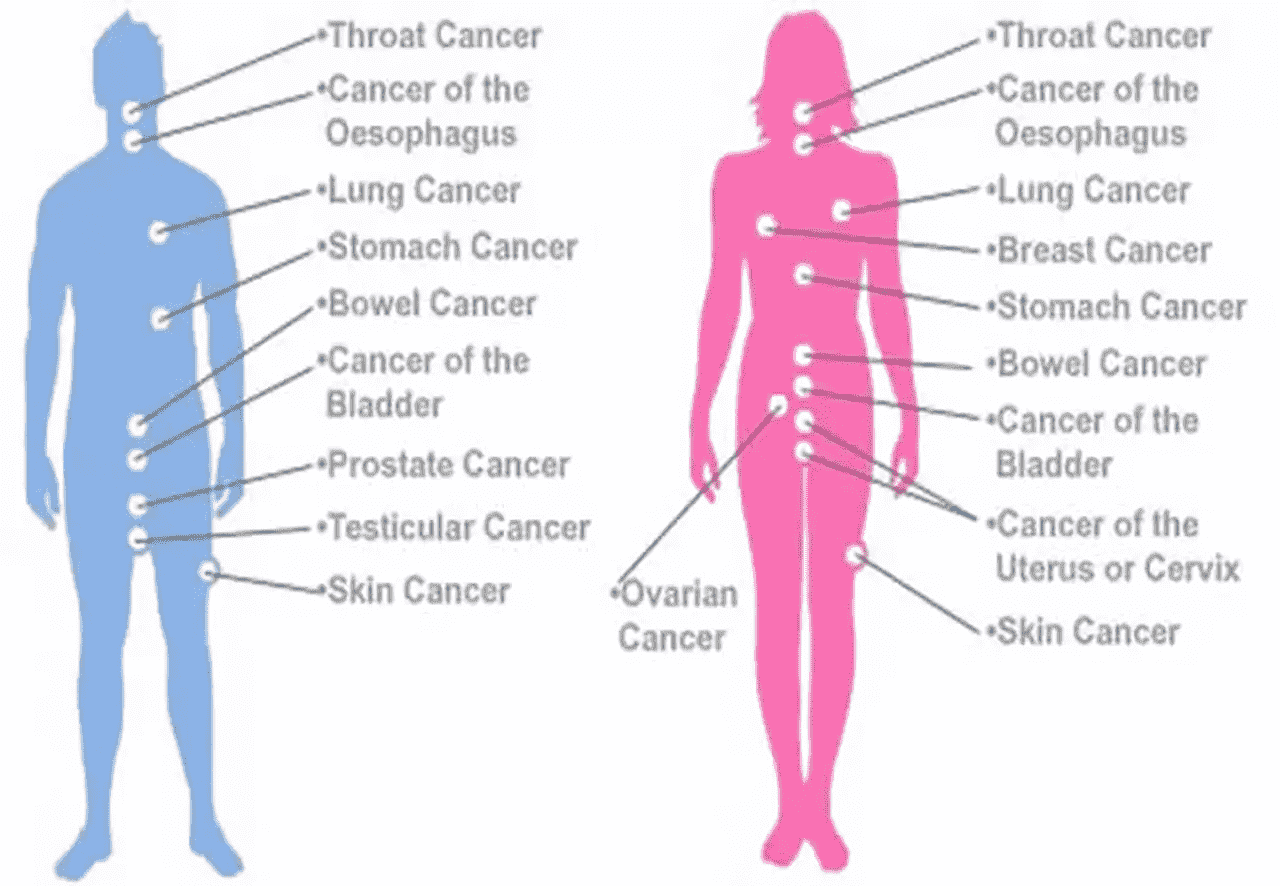 Cancers are classified by the type of cell that the tumor cells resemble and is therefore presumed to be the origin of the tumor. These types include: (1) Carcinoma: Cancers derived from epithelial cells. This group includes many of the most common cancers and include nearly all those in the breast, prostate, lung, pancreas and colon. (2) Sarcoma: Cancers arising from connective tissue (i.e. bone, cartilage, fat, nerve), each of which develops from cells originating in mesenchymal cells outside the bone marrow. (3) Lymphoma and leukemia: These two classes arise from hematopoietic (blood-forming) cells that leave the marrow and tend to mature in the lymph nodes and blood, respectively. (4) Germ cell tumor: Cancers derived from pluripotent cells, most often presenting in the testicle or the ovary (seminoma and dysgerminoma, respectively). (5) Blastoma: Cancers derived from immature "precursor" cells or embryonic tissue. Depending on what part of the body is affected, common cancers can be listed as follows (according to the report by WHO in September 2018):

The cause of malignant tumor is not fully understood. At present, the relatively clear factors related to cancer can be divided into two categories: exogenous and endogenous:

(2) Environmental pollution and occupational air, drinking water and food pollution can cause serious harm to human beings. The environment-related carcinogens include arsenic, asbestos, benzidine, chromium, diethylstilbestrol, radioactive radon gas, and so on.

(3) Natural and biological factors can also cause cancer, for example, ultraviolet rays can cause skin cancer under certain conditions. The main biological factors were viruses, of which 1/3 was DNA virus (such as Epstein-Barr virus, EBV) and 2/3 was RNA virus (such as hepatitis C virus, HCV). In addition, some bacteria, parasites and fungi can all cause cancer under certain conditions.

(5) Iatrogenic factors such as ionizing radiation, such as X-ray and radionuclides can cause skin cancer and leukemia, and cytotoxic drugs, hormones, arsenic and immunosuppressants all have the possibility of causing cancer.

(2) Congenital or acquired immunodeficiency is prone to malignant tumors, such as patients with C protein deficiency are prone to leukemia and lymphohematopoietic system tumor, the incidence of malignant tumors of AIDS patients is significantly higher.

(3) Abnormal hormone level is one of the inducing factors of tumor, such as estrogen and prolactin are related to breast cancer, growth hormone can stimulate the development of cancer.

Prevention and Treatment of Cancers

Some ways to prevent cancer include: (1) Keep a good state of mind to deal with stress, relax properly after work, and don't be overtired. (2) Strengthen physical exercise, strengthen physique and improve immunity. (3) Develop good living habits, so as to keep all kinds of cancer diseases away from themselves. (4) Do not eat contaminated food, eat some green organic food, especially to prevent the disease from entering the mouth. (5) Take the initiative to do anti-cancer examination.

There are many kinds of malignant tumors, including different types of tumors, different tissues and organs involved, different stages of disease, and different responses to various treatments, so most patients need comprehensive treatment. The so-called comprehensive treatment is based on the patient's physical condition, the pathological type of the tumor, the scope of invasion and so on, comprehensive use of surgery, chemotherapy, radiotherapy, targeted therapy, immunotherapy, traditional Chinese medicine therapy, interventional therapy, microwave therapy, gene therapy, endocrine therapy, laser therapy, cryotherapy, hyperthermia therapy and other means, in order to greatly improve the cure rate and improve the quality of life of patients.