Creative Biolabs summarizes a short overview of Inolimomab, which consists of definition, mechanism of action, and clinical projects.

Inolimomab is an IgG1κ type mouse monoclonal antibody direct against interleukin-2 receptor alpha chain (IL-2RA), which is also called as CD25. This drug was developed by Orphan Pharma International (OPi), which changed its name to EUSA Pharma SAS, as an immunosuppressive drug for the treatment of acute graft-versus-host disease (GvHD). GvHD is a common complication of bone marrow transplantation, which is a treatment for some bone marrow diseases. GvHD is the reaction between the donor cells and the recipient (host) natural tissue, which can cause tissue damage to the recipient. There are two types of GvHD: acute and chronic, both of which threaten the survival rate of the patients. On 5 March 2001, the European Commission grants OPi's inolimomab orphan designation for the treatment of GvHD. Later, the sponsorship was transferred to ElsaLys Biotech SA in October 2017. In 2006, the study reported encouraging results in trials of inolimomab in the treatment of GvHD. Since then, the therapeutic effects of inolimomab have been analyzed. In 2016, studies reported that inolimomab has been investigated in the treatment of severe steroid refractory acute graft-versus-host disease in combination with etanercept, but the results showed that the combined treatment could not improve the prognosis of acute GVHD. Therefore, more research is needed on the therapeutic effect of inolimomab on GVHD.

Mechanism of Action of Inolimomab

Interleukin-2 receptor alpha chain (IL-2RA), the target molecular of inolimomab, is one type of the interleukin-2 receptor (IL-2R). IL-2R is an important immunomodulatory factor and plays an important role in the regulation of T cell biological function. IL-2RA is only composed of α-chain and has a low affinity. It is considered as a marker of activation of T lymphocytes. IL-2RA is present on activated T cells, activated B cells, some thymocytes, bone marrow precursors and oligodendrocytes. It has been found that if the monoclonal antibody of anti-T cell antigen Tac, which will compete with IL-2, is used in bone marrow transplantation to remove Tac positive donor cells, graft-versus-host reaction can be reduced. Therefore, selective blocking and elimination of activated effector cells with IL-2R monoclonal antibody has become a new strategy for the treatment of allograft rejection and some autoimmune diseases. Inolimomab is a synthetic monoclonal antibody used to recognize IL-2RA on activated T cells in the immune system. By binding to the antigen IL-2RA that causes GVHD, the proliferation of activated T cells is prevented, while the cells not activated are retained. 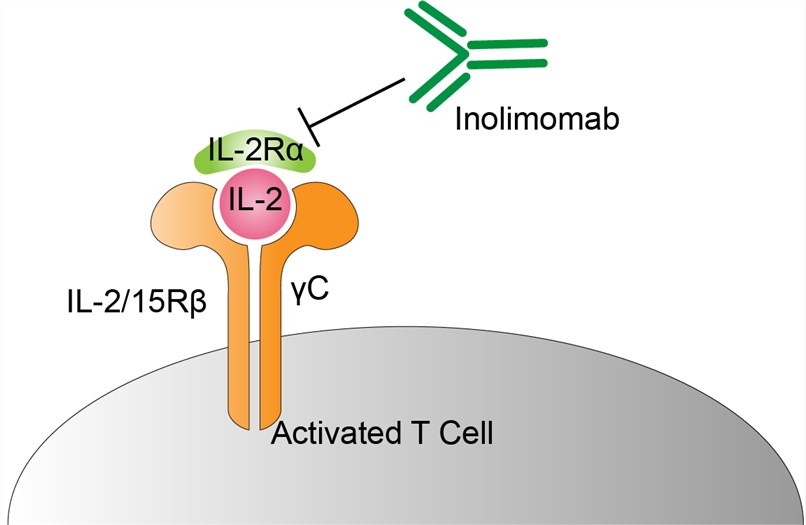 Fig.1 Mechanism of Action of Inolimomab

We provide high-quality (IgG1κ type) for use in IP, IF, FuncS, FC, Neut, ELISA, ICC and most other immunological methods. For lab research use only, not for diagnostic, therapeutic or any in vivo human use.