Creative Biolabs summarizes a short overview of Indatuximab Ravtansine, which consists of definition, mechanism of action, and clinical projects.

Indatuximab ravtansine (BT062) is an antibody-drug conjugate (ADC) based on a murine/human chimeric form of B-B4 (CD138-specific antibody), which is covalently conjugated to the maytansinoid drug DM4 via a disulfide bond-based linker. Maytansinoids are structural analogs of the cytotoxic agent maytansine, which has been evaluated in phase I and phase II clinical trials. They exhibit anti-mitotic activity by inducing metaphase arrest of dividing cells, causing cell death. Upon internalization of indatuximab ravtansine by target tumor cells, lysosomal processing of the disulfide linker generates a lysine metabolite which is reduced and S-methylated producing the lipophilic and cytotoxic metabolite, S-methyl-DM4. The mechanism of action of indatuximab ravtansine resembles that of trastuzumab emtansine, an antibody-drug conjugate indicated for HER2-positive metastatic breast cancer which uses the HER2-targeting properties of trastuzumab to deliver the cytotoxic DM1 within the cell by means of a stable linker. The intracellular drug delivery to target tumor cells can improve the therapeutic index of the cytotoxic drug and minimize exposure of normal tissue. Indatuximab ravtansine has previously been shown in vivo in multiple myeloma mouse xenograft models to significantly inhibit tumor growth and prolong host survival without any toxicity signals. Based on these preclinical results, a phase I clinical trial of indatuximab ravtansine demonstrated the first signs of clinical activity in patients with relapsed or refractory multiple myeloma without any toxicity signals. Furthermore, preliminary data from a phase I/IIa study in relapsed or refractory multiple myeloma indicated that indatuximab ravtansine is well tolerated even in a multiple-dose schedule and provided further evidence of clinical activity. Indatuximab ravtansine is being investigated as part of a treatment for multiple myeloma.

Mechanism of Action of Indatuximab Ravtansine

CD138 (syndecan-1) is the most characterized member of the syndecan family, which constitute a major class of cell surface heparan sulfate proteoglycans (HSPGs). CD138 acts as a receptor for the extracellular matrix and is involved in several cellular functions including cell-cell adhesion, cell-matrix interaction, cellular proliferation, and differentiation. CD138 is overexpressed on malignant plasma cells and expressed by epithelial cells in non-hematopoietic tissue, although transient expression in condensing mesenchyme also occurs during embryonal morphogenesis. Expression of CD138 is widely detected in epithelial neoplasms of various origins and, in rare cases, mesenchymal tumors. Certain pathophysiologic conditions such as tumorigenesis, neoplastic progression, and metastasis can alter the expression of CD138 and its family members. After binding to the CD138, the CD138 and indatuximab ravtansine are internalized via endocytosis. Intracellularly, DM4 is separated from the antibody by lysosomal degradation and binds to tubulin. This disrupts the microtubules causing cell cycle arrest and apoptosis. While indatuximab is utilized to deliver ravtansine to the cell, it also retains its properties of ADCC, inhibition of CD138 signaling pathways, and prevention of CD138 receptor shedding. 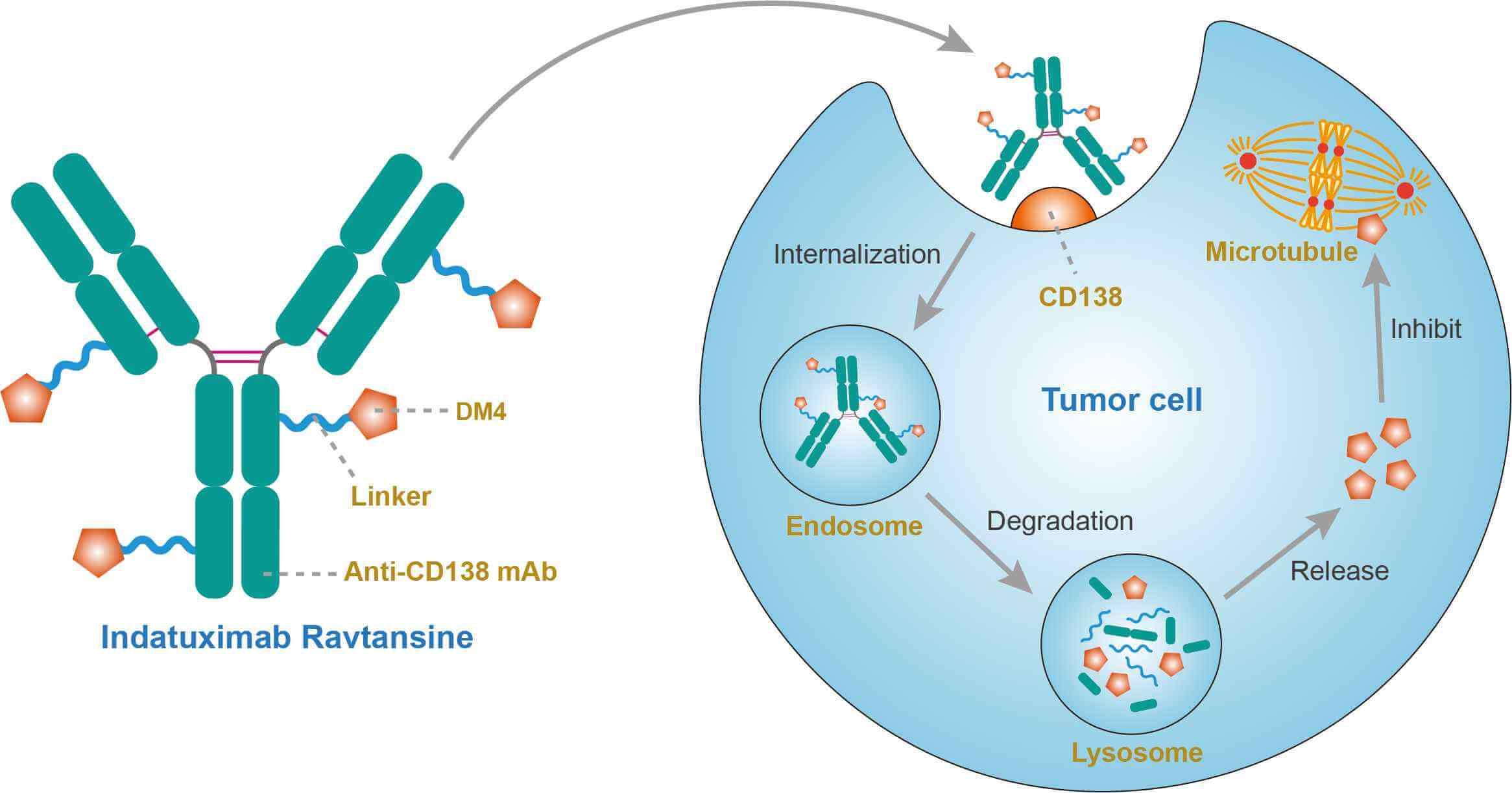