Creative Biolabs summarizes a short overview of Sofituzumab Vedotin, which consists of definition, mechanism of action, and clinical projects.

Mechanism of Action of Sofituzumab Vedotin

MUC16 (previously known as CA125) has been extensively used as a biomarker for ovarian cancer, and its expression has been associated with disease progression. Key advances have revealed the structure and functions of this protein and the role it plays in fundamental processes, including protection of the epithelium and human carcinogenesis. The expression of mucins in resting, normal polarized cells is intricately controlled, with expression restricted on the apical membranes of exposed epithelia. Following loss of cell polarity during carcinogenesis, mucins are expressed all over the cell surface, and become available to interact with several growth factor receptors, that are typically restricted to the basolateral surface, and modulate their downstream signaling in various cancers. Aberrant overexpression of MUC16 has been observed in several human malignancies, including ovarian, pancreatic, breast, and lung. Due to their aberrant overexpression and functional involvement, MUC16 and its ligands have emerged as potential targets for therapeutic intervention using monoclonal antibodies and immunotherapy.

As an ADC, sofituzumab vedotin consists of a human anti-nectin-4 antibody conjugated to the anti-mitotic agent MMAE, it binds to MUC16 on the surface of cancer cells, followed by internalization of the conjugate by endocytosis and release of its cytotoxic payload MMAE after lysosomal degradation. MMAE is a synthetic antineoplastic agent. Because of its toxicity, it cannot be used as a drug itself; instead, it is usually linked to a mAb which directs it to the cancer cells. MMAE disrupts microtubules and induces apoptosis of the tumor cell. In addition to the direct cytotoxic effect of MMAE at the cellular level, the antitumor effect of sofituzumab vedotin may be mediated through additional mechanisms involving signal transduction inhibition from direct binding, antibody-dependent cellular cytotoxicity (ADCC) and complement-dependent cytotoxicity (CDC). 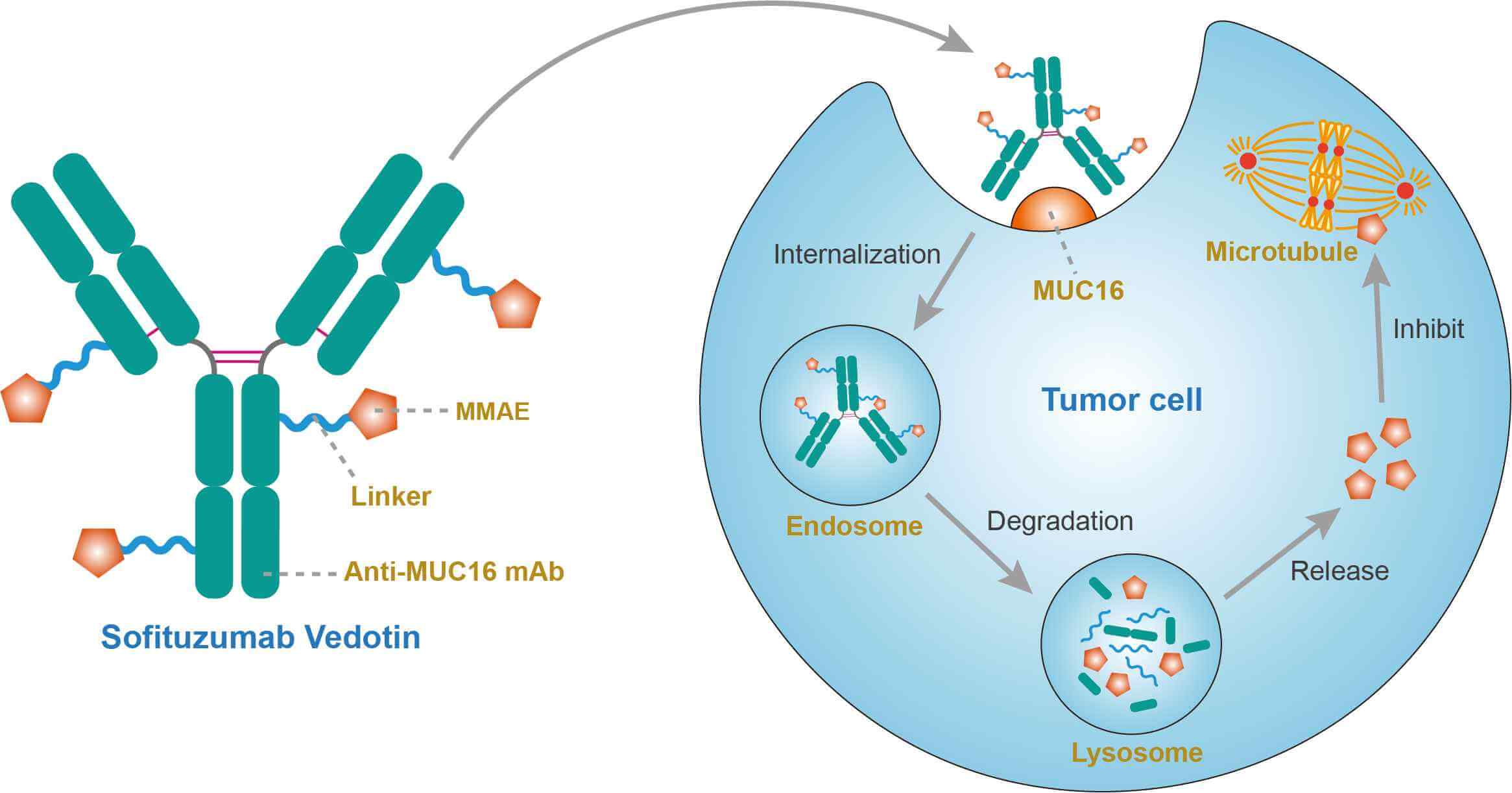