It has been more than one hundred years from antibody’s first discovery in blood serum to the current therapeutic antibody development. Antibody structure and antibody function is well known, so it won’t be repeated in this overview.

What Are Therapeutic Antibodies? 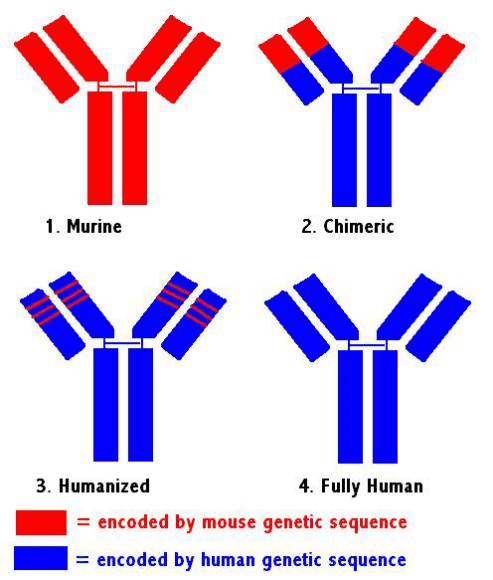 Another stage of therapeutic antibody is fully human antibody which benefits from the development of two technologies. The first one is in vitro screening technology–phage display. In 1990, Greg Winter`s laboratory introduced this new technology by amplifying immunoglobulin variable region from hybridomas or B cells and cloning into expression vector. Phages carrying complete variable region gene displayed protein expressed by antibody variable region on their surface, then they could be selected directly by specific antigen. Once expressed variable region protein binding the specific antigen was selected, its gene is immediately available, allowing sequencing of phage clone and further manipulation, which made it possible to rapidly and effectively select fully human antibody. Another technology is transgenic mouse replacing the whole mouse IgG repertoire with a human one. The transgenic mouse is immunized with specific antigen, then high affinity antibody can be generated through hybridoma technology. Compared to phage display, transgenic mouse has obvious advantages. They do not need additional affinity maturation procedure. Moreover, a full-length IgG is directly generated, which is often the preferred format of therapeutic antibody. However, if the antigen is toxic, the phage display may be a better choice. In 2002，12 years after the first description of phage display technology, the first fully human antibody approved by FDA was adalimumab which achieved huge success with a wide range of indications.