Pemtumomab is a HMFG1 murine monoclonal antibody (mAb) radiolabeled with Yttrium-90. The antibody targets the mucin 1 (MUC1) protein, which is expressed by a high proportion of gastric carcinomas. High levels of MUC1 expression have been correlated with progression and poor prognosis. After surgery for gastric cancer, relapse and disease progression frequently occur within the peritoneal cavity. It is proposed that the intraperitoneal administration of pemtumomab could prevent progression of the disease or improve survival in patients with minimal disease after resection. Previous experience with this treatment suggests that it is more readily tolerated than chemotherapy, and in an earlier phase-II study, adjuvant use of intraperitoneal pemtumomab in ovarian cancer patients (who also often show intraperitoneal disease on relapse) improved survival in comparison with conventional treatment. In a multinational, open-label, randomized phase-III trial comparing yttrium-90-labeled murine HMFG1 (90Y-muHMFG1) plus standard treatment versus standard treatment alone in patients with epithelial ovarian cancer (EOC) who had attained a complete clinical remission after cytoreductive surgery and platinum-based chemotherapy, a single intraperitoneal (IP) administration of 90Y-muHMFG1 to patients with EOC did not extend survival or time to relapse.

Mechanism of Action of Pemtumomab

MUC1 is a member of the mucin family and encodes a membrane-bound, glycosylated phosphoprotein. MUC1 has a core protein mass of 120-225 kDa which increases to 250-500 kDa with glycosylation. It extends 200-500 nm beyond the surface of the cell. MUC1 is normally expressed in the glandular or luminal epithelial cells of the mammary gland, esophagus, stomach, duodenum, pancreas, uterus, prostate, and lungs, and to a lesser extent, in hematopoietic cells. MUC1 serves a protective function by binding to pathogens and also functions in a cell signaling capacity. In the cell nucleus, the protein MUC1 regulates the activity of transcription factor complexes that have a documented role in tumor-induced changes of host immunity. Overexpression, aberrant intracellular localization, and changes in glycosylation of this protein have been associated with carcinomas. Aberrantly glycosylated MUC1 is overexpressed in most human epithelial cancers and has gained remarkable attention as an oncogenic molecule. Tumor-associated MUC1 (TA-MUC1) differs from that expressed in normal cells, both in its biochemical features and its cellular distribution. The ability of chemotherapeutic drugs to access the cancer cells is inhibited by the heavy glycosylation in the extracellular domain of MUC1. The glycosylation creates a highly hydrophilic region which prevents hydrophobic chemotherapeutic drugs from passing through. This prevents the drugs from reaching their targets which usually reside within the cell. Similarly, the glycosylation has been shown to bind to growth factors. This allows cancer cells which produce a large amount of MUC1 to concentrate growth factors near their receptors, increasing receptor activity and the growth of cancer cells. MUC1 also prevents the interaction of immune cells with receptors on the cancer cell surface through steric hindrance. This inhibits an anti-tumor immune response. Pemtumomab binds to the extracellular domain of the MUC1 tumor antigen, delivering a cytotoxic dose of beta radiation, which helps to kill the tumor cells. While pemtumomab is utilized to deliver Yttrium-90 to the cell, it also retains its properties of ADCC, which may result in the inhibition of MUC1-mediated signaling pathways. 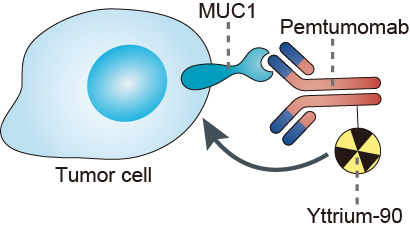 Fig.1 Mechanism of Action of Pemtumomab

We provide high-quality for use in ELISA, IP, FC, FuncS, Neut, IF and most other immunological methods. For lab research use only, not for diagnostic, therapeutic or any in vivo human use.