Mechanism of Action of Prezalumab

Inducible costimulator ligand (ICOSL), the target molecular of prezalumab, also known as B7-related protein-1 (B7RP-1) in mouse. ICOSL belongs to the B7 family and is widely expressed in non-lymphoid tissue and lymphoid tissue of the body. ICOSL was mainly expressed in B cells and monocytes in lymphoid tissue, and also expressed in macrophages and dendritic cells. ICOSL is also expressed in non-lymphoid tissues, such as melanoma cells and glioma cells. The signal produced by the binding of ICOSL to ICOS plays an important role in the activation of T cell-dependent B cells, which promotes the synthesis of antibodies and the secretion of IL10 by B cells. This signal is involved in regulating the differentiation of Th cells, enhancing the Th2 response and inhibiting the Th1 response. Because ICOS/ICOSL signaling pathway plays an important role in the immune process of the body, blocking this pathway may be an effective method to treat systemic lupus erythematosus (SLE) and other autoimmune diseases. Prezalumab is an IgG2 type monoclonal antibody designed to bind to ICOSL, inhibiting the interaction between ICOSL and ICOS and reducing the body's autoimmune response. 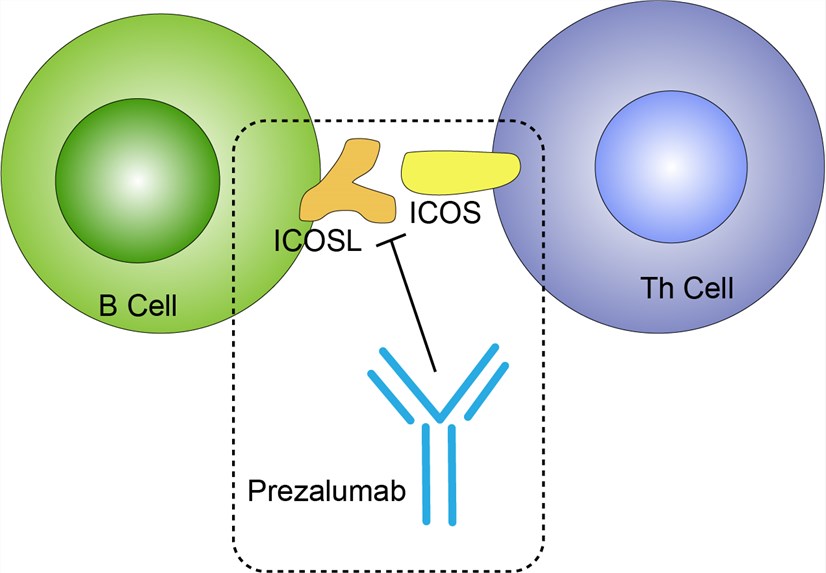 Fig.1 Mechanism of Action of Prezalumab

We provide high-quality (IgG2κ type) for immunoassay techniques such as: Enzyme-Linked Immunosorbent Assay; Immunohistochemistry; Immunofluorescence; Immunoprecipitation; Flow Cytometry. For lab research use only, not for diagnostic, therapeutic or any in vivo human use.