Creative Biolabs summarizes a short overview of Efalizumab, which consists of definition, mechanism of action, and clinical projects.

Efalizumab is a recombinant humanized monoclonal IgG1 antibody for the treatment of plaque psoriasis. It was developed by Genentech with the trade name Raptiva. It is a targeted T cell modulator against α chain of eukocyte function-associated antigen-1 (LFA-1). Efalizumab was originally marketed to treat psoriasis and was the first plaque psoriasis-specific biologic drug, once weekly by subcutaneous injection. Efalizumab has shown favorable efficacy in the treatment of psoriasis. While the therapy for other disease including pustular psoriasis of the palms and soles, generalized granuloma annulare, cutaneous lupus erythematosus, cutaneous dermatomyositis, atopic dermatitis and alopecia areata is still been investigated. More than 50 clinical trials of efalizumab have been conducted, and most of them are terminated or withdrawn. Only three trials are recruiting at present. They are the registry about the treatments in Psoriasis. Based on the early positive pharmacokinetic and pharmacodynamic effects of efalizumab in psoriasis patients, efalizumab was approved by the Food and Drug Administration in November 2003 and by the European Medicines Evaluation Agency in September 2004. More than 2700 patients participated in these studies. It was approved for the treatment of adult patients with chronic moderate-to-severe plaque psoriasis who are candidates for systemic therapy or phototherapy in US. While in EU, it also approved for who have failed to respond to, have a contraindication to or are intolerant of other systemic therapies, including cyclosporine, methotrexate and PUVA photochemotherapy. Although the efficacy of efalizumab therapy is positive in those clinical trials, adverse events still occur. They were generally mild and consisted of infections and psoriasis eruptions. Until three cases of progressive multifocal leukoencephalopathy in long term-treated patients, efalizumab was withdrawn from the market at the request of the marketing authorisation holder in 2009. In addition, some co-morbidities including cardiovascular disease, metabolic syndrome and liver diseases are happed in the case of treatment.

Mechanism of Action of Efalizumab

Efalizumab is the active substance of raptiva. The molecular weight of efalizumab is approximately 150 KDa. It is a recombinant murine antibody produced in a Chinese hamster ovary mammalian cell expression system. The target molecular of efalizumab is lymphocyte function-associated antigen-1 (LFA-1), which is consist in two subunits designated as the α subunit (CD11a) and β subunit (CD18). The CD11a, also known as ITGAL, is important for the binding of T lymphocytes to the ICAM-1 molecule (LFA-1 ligand) expressed on vascular endothelial cells at sites of inflammation, antigen-presenting cells as well as keratinocytes in a variety of T cell–mediated disorders. By binding to ITGAL, efalizumab blocks the binding LFA-1 to ICAM-1, inhibiting multiple stages in the immunopathogenesis of psoriasis including: initial T lymphocytes to memory T lymphocytes activation, lymphocyte migration and reactivation of T lymphocytes in skin, and T-cell reactivation. 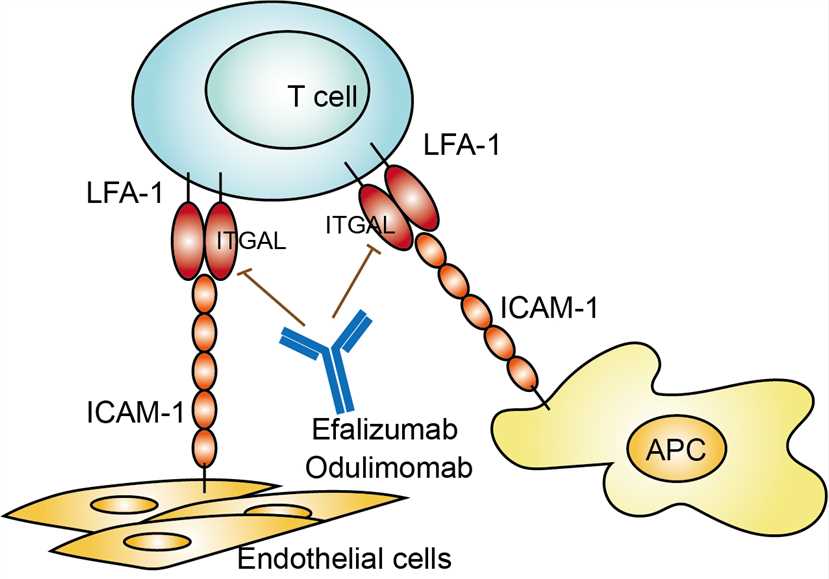 Fig.1 Mechanism of Action of Efalizumab

References
* The table was excerpted from the following website
https://clinicaltrials.gov/ct2/results?cond=&term=Efalizumab