Creative Biolabs summarizes an overview of monoclonal antibody biosimilars, such as definition, development process and future outlook of biosimilars.

Biologics are critical components in the treatment of patients with cancer. Biosimilars - biologics that are highly similar to approved biologics - offer a potential opportunity to increase access to biologics by stimulating price competition and may lower healthcare costs. The active substance of a biosimi­lar and the original (approved medicine) are essentially the same biological substance, though there may be minor differences due to their complex nature and the production methods.

A consequence of the astronomical commercial value of mAbs associated with the patent expiry date (or estimated expiry date) is their attractiveness as candidates for biosimilar drugs.

An appropriate definition of biosimilars includes the following:

Biosimilars are more complex than small-molecule drugs and generics. Biological medicines (Biologics) are large, complex molecules produced from living organisms that are often difficult to characterize and therefore difficult to copy. Generic medicines (Generics) usually consist of small, identical molecules that are chemically synthesized. It is important to understand several key differences between biologics and small-molecule drugs. In addition, the manufacturing process for biologics is more complex than for small-molecule drugs, which requires multiple steps for cloning; selecting, maintaining, and expanding the cell line; and isolating, purifying, and characterizing the product (Fig. 1). Small-molecule drugs are synthesized through a series of predictable chemical reactions that can be reliably reproduced to yield identical copies. 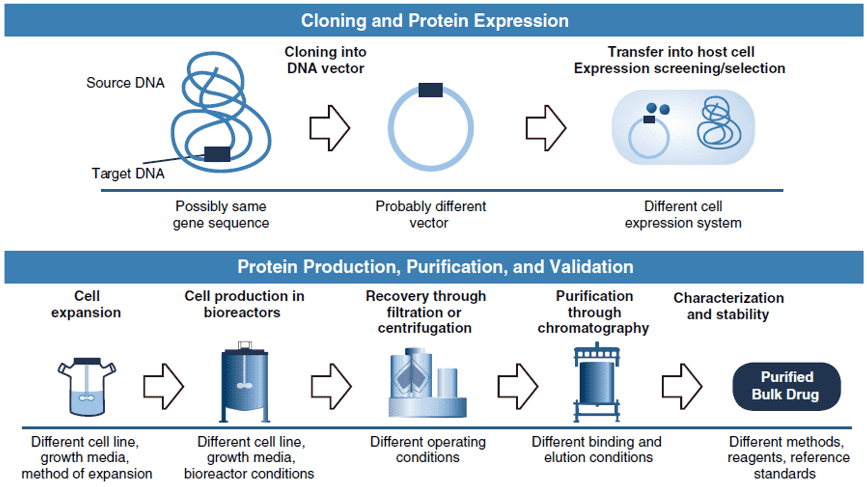 Figure 1. Biologic manufacturing includes multiple steps that may vary between manufacturers, potentially leading to differences between a biosimilar and its reference product that cannot be fully characterized with available analytical methods. In contrast, small-molecule drugs are manufactured through chemical reactions that can be reliably reproduced to make identical copies (generics) that can be fully characterized.

Designed to be highly similar to originator biologic products, biosimilars represent an opportunity to increase access and reduce costs for patients and healthcare systems. Biosimilars of monoclonal need to demonstrate similar but not identical quality of nonclinical and clinical attributes. Not all data of the originator product need to be recapitulated, as large numbers of patient-years of exposure data are already available. A well-designed development program establishes biosimilarity based on structural, functional, preclinical, and clinical evaluation. A systematic approach for characterization of structural and functional similarity of a biosimilar molecule to the originator molecule provides specifications to guide the development of biosimilars. Biosimilar endpoints are defined for each tier of characterization, and evaluation of successive tiers addresses additional relevance of biosimilarity. Thus, biosimilar development is largely based on the safety profiles of the originator product. The biosimilarity analysis of biosimilars development is described as a five-step process:

Unlike the development of novel biologics, biosimilar data focus heavily on the molecular characterization of the mAb with randomised clinical studies confirming that any differences in physico-chemical or biological characterization compared with the reference mAb do not affect efficacy or safety (Figure 2). The challenge of biosimilar development requires intricate reverse engineering, as biologic drugs exhibit great molecular complexity and are sensitive to variations in manufacturing and handling.

Figure 2 Comparability and biosimilarity design of a biosimilar

The list of common monoclonal antibody biosimilars is as follows:

The development of biosimilars for complex mAbs, which are the highest-selling biologics and is a key therapeutic class for diseases including various cancers and autoimmune disorders such as rheumatoid arthritis, is accelerating rapidly owing to the upcoming patent expiry of top-selling drugs. Despite technical and manufacturing hurdles, these complexand large molecules especially antibody-based proteins are poised to be the leaders of the new wave of biosimilars that are likely to receive approval in the coming years. Driven by the prospect of patent expirations of blockbuster mAbs in the next few years (Table 1), many pharmaceutical companies have entered the rapidly growing mAb biosimilars market.

*The date given is based on the expected expiry of patents protecting the original molecule.

Biosimilars are a huge opportunity. The market will eventually become a huge business no matter how slowly it starts. There are several elements to boost biosimilars’ market growth including patent expiries, defined regulatory pathways and escalating healthcare costs. According to some professional investigational agency, it is estimated that biologic drugs worth $70-$80 billion will lose exclusivity in the next 5 years globally. Moreover, the launch of innovation production platforms will reduce the cost of biosimilars production, thus providing substantial price differentiation. In the next 4 to 5 years, two-thirds of the patents will expire in biosimilars and specialty segments, such as high profit margins of biomedical fields.

To boost your biosimilar research programs, Creative Biolabs provides a full range of therapeutic antibodies currently available for research of a wide variety of diseases. We have rich experience for over 10 years to offer high quality antibodies that will meet your any requirement.