Mechanism of Action of Lifastuzumab Vedotin

The antibody of lifastuzumab vedotin is targeted SLC34A2，which is also known as sodium-dependent phosphate transport protein 2B (NaPi2b), a tumor-associated antigen. The biological function of SLC34A2 may be to actively transport phosphate into cells by participating in Na+ co-transport. Phosphate (Pi) is related to a variety of cell biological functions, such as energy metabolism, intracellular signal transduction, surfactant synthesis in alveoli and so on. In addition, SLC34A2 has been detected over-expression in ovarian cancer and papillary thyroid carcinoma, which indicates that SLC34A2 has a little relationship with the development of some tumors. The toxin part of the drug is monomethyl auristatin E (MMAE, vedotin), a toxin that inhibits cell mitosis by inhibiting tubulin polymerization. It is highly toxic that cannot be used as a therapeutic drug alone and often conjugated with monoclonal antibodies to provide targeting. In extracellular fluid, the antibody-drug conjugate formed by MMAE and monoclonal antibody is stable, but when the complex binds to specific tumor antigens, the linker is hydrolyzed by protease and toxin MMAE is released into the cytoplasm. Then, MMAE binds to microtubules and inhibits its protein polymerization, inhibiting the tumor cell division. 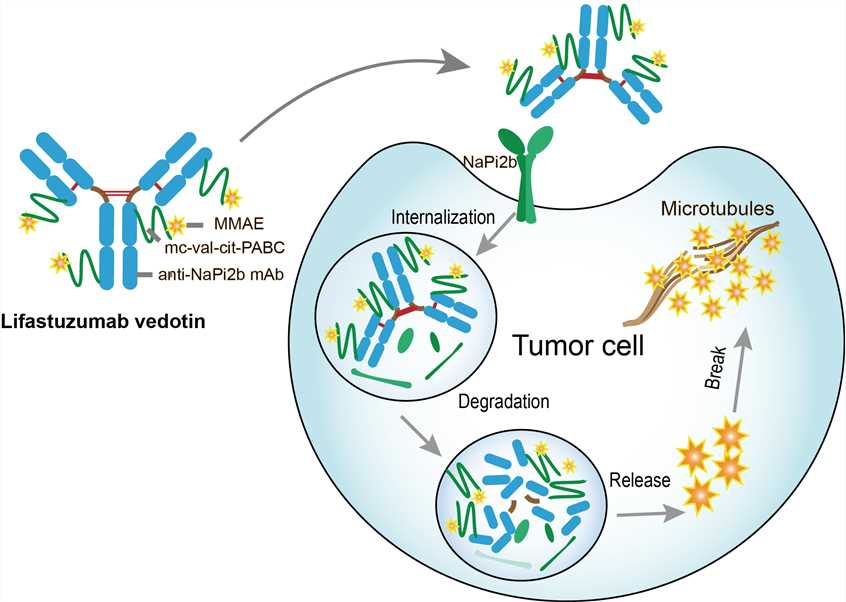