Wnt comprises a diverse family of secreted lipid-modified signaling glycoproteins that are 350-400 amino acids in length. Wnt is an acronym in the field of genetics that stands for 'Wingless/Integrated'. Wnt signaling mainly consists of two pathways. The canonical Wnt pathway leads to regulation of gene transcription, and is thought to be negatively regulated in part by the SPATS1 gene. These two pathways are activated by the binding of a Wnt-protein ligand to a Frizzled (Fzd) family receptor, which passes the biological signal to the Dishevelled protein inside the cell. The non-canonical Wnt/calcium pathway regulates calcium inside the cell. In canonical Wnt signaling, absence of Wnt ligands leads to phosphorylation of β-catenin by the destruction complex, which contains the scaffold protein AXIN, APC and the kinases GSK3β and casein kinase (CK1α). In this state, β-catenin is phosphorylated by GSK3β, ubiquitinated by β-TrCP and targeted for proteasomal degradation. In the absence of nuclear β-catenin, a repressive complex containing TCF/LEF and transducing-like enhancer protein (TLE/Groucho) recruits HDACs to repress target genes. The canonical pathway is activated upon binding of secreted Wnt ligands to Fzd receptors and LRP co-receptors. LRP receptors are then phosphorylated by CK1α and GSK3β, which recruits Dishevelled (DVL) proteins to the plasma membrane where they polymerize and are activated. The DVL polymers inactivate the destruction complex, for example, by sequestration in multivesicular bodies. This results in stabilization and accumulation of β-catenin which then translocates into the nucleus. There, β-catenin forms an active complex with LEF (lymphoid enhancer factor) and TCF (T-cell factor) proteins by displacing TLE/Groucho complexes and recruitment of histone modifying co-activators such as CBP/p300, BRG1, BCL9 and Pygo. This transcriptional switch leads to a change of multiple cellular processes. Non-canonical Wnt signaling is defined by β-catenin-independent mechanisms of signal transduction. During Wnt/PCP signaling, Wnt ligands bind to the ROR-Frizzled receptor complex to recruit and activate DVL. DVL binds to the small GTPase Rho by de-inhibition of the cytoplasmic protein DAAM1 (DVL associated activator of morphogenesis 1). The small GTPase RAC1 and RHO together trigger ROCK (RHO kinase) and JNK. This leads to rearrangements of the cytoskeleton and/or transcriptional responses via for example, ATF2 (activating transcription factor 2). Next to DVL, Vangl, a key member of Wnt/PCP signaling is activated by phosphorylation in a Wnt5a-dependent manner. Wnt/Ca2+ signaling is initiated by G-protein triggered phospholipase C activity leading to intracellular calcium fluxes and downstream calcium dependent cytoskeletal and/or transcriptional responses. 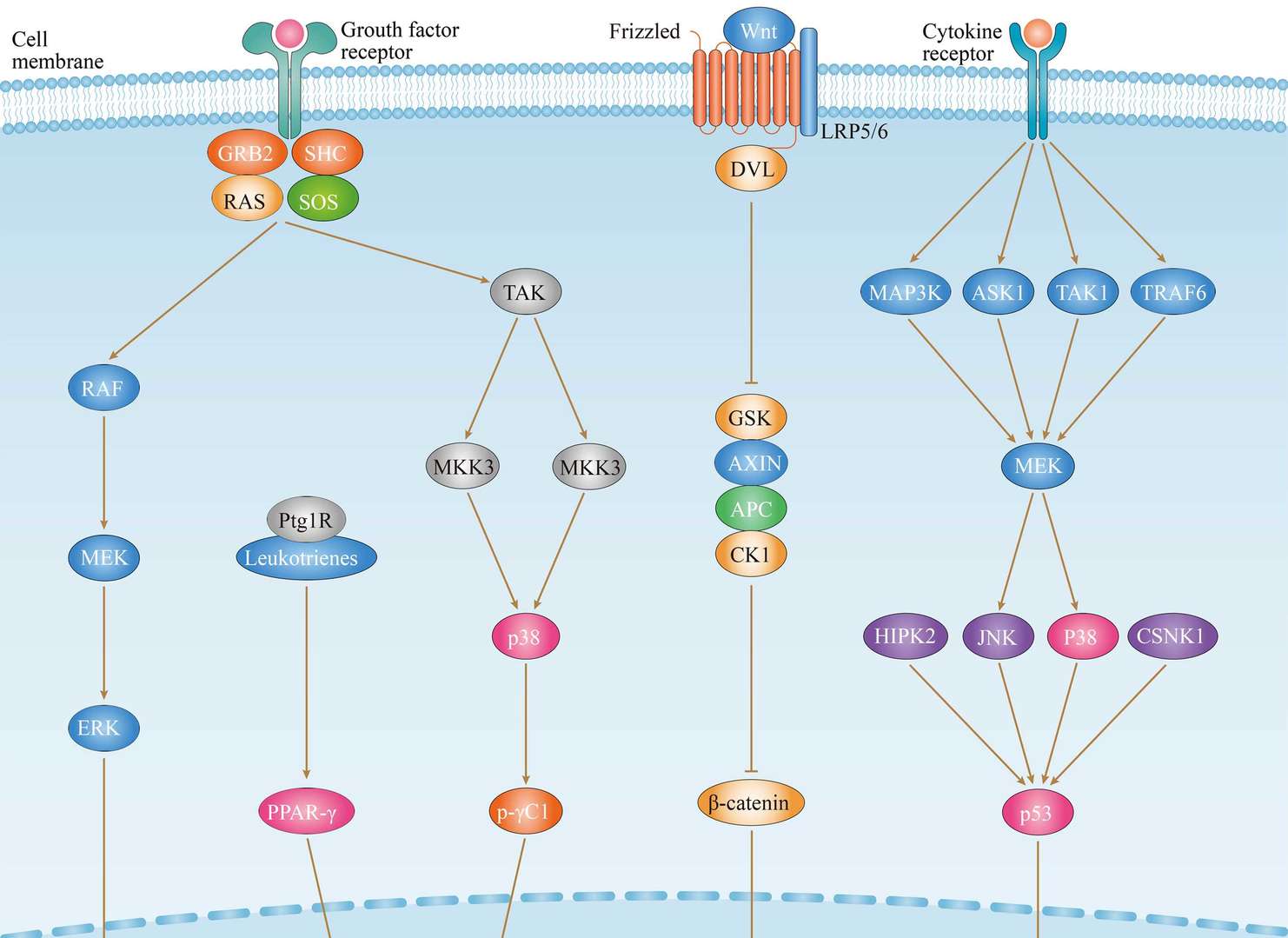