The Notch gene encodes a class of highly conserved cell surface receptors that regulate the development of a variety of biological cells from sea urchins to humans. There are four homologous Notch receptors in mammals including Notch1, Notch2, Notch3, and Notch4. And there are two kinds of homologous ligands: Delta-like ligands, including Dll-1, Dll-3 and Dll-4; Serrate-like ligands, which are Jagged-1 and Jagged-2 respectively. All homologous Notch receptors are type I transmembrane proteins, which are composed of intracellular domain, transmembrane domain and extracellular domain. Notch signal affects many processes of normal cell morphogenesis, including differentiation of pluripotent progenitor cells, apoptosis, cell proliferation and cell boundary formation.

The activation of Notch signal pathway requires three steps: firstly, in the cell, the single-stranded precursor molecule of the synthesized receptor protein is digested by furin protease in Golgi, and the restriction site is located at the S1 site of the extracellular end of the transmembrane region of Notch. The digested extracellular domain and transmembrane fragment bind together through a Ca2+-dependent non-covalent bond to form a heterodimer form of mature Notch receptor, which is transported to the cell surface. When the ligand binds to the extracellular domain, the Notch receptor, under the action of tumor necrosis factor-α-converting enzyme (TACE) of the ADAM (a disintegrin and metalloprotease) metalloproteinase family or kuzbanian (Kuz), undergoes a second digestion at the S2 site, releasing part of the extracellular fragment, and the rest is called "Notch-intro TM" on the cell membrane. The constitutive digestion by presenilin (PS)-dependent γ-secretase occurs at the S3 site. After this enzyme digestion process, soluble intracellular domain of the notch protein (NICD) was formed and transferred to the nucleus. After NICD enters the nucleus, it binds to CSL (also known as recombination signal binding protein for immunoglobulin kappa J region, RBPJ) protein to convert the original "co-inhibition complex" into "co-activation complex", and then forms a multi-protein-DNA complex with DNA to activate the expression of related genes.

Besides binding to CSL, Notch signal transduction can also regulate the expression of related genes through non-CSL-dependent regulation pathways. Most of the downstream genes that NICD can act on are basic helix-loop-helix-like transcription factors (bHLH).

The activation of Notch signaling pathway leads to tumorigenesis mainly from the following two aspects: (1) inducing the expression of growth-promoting genes such as cyclin D1 and c-Myc; (2) triggering anti-apoptotic pathways such as P13K/AKT; in addition, in some tissues, Notch can promote tissue growth, tissue self-renewal and maintain the undifferentiated state of stem cells. 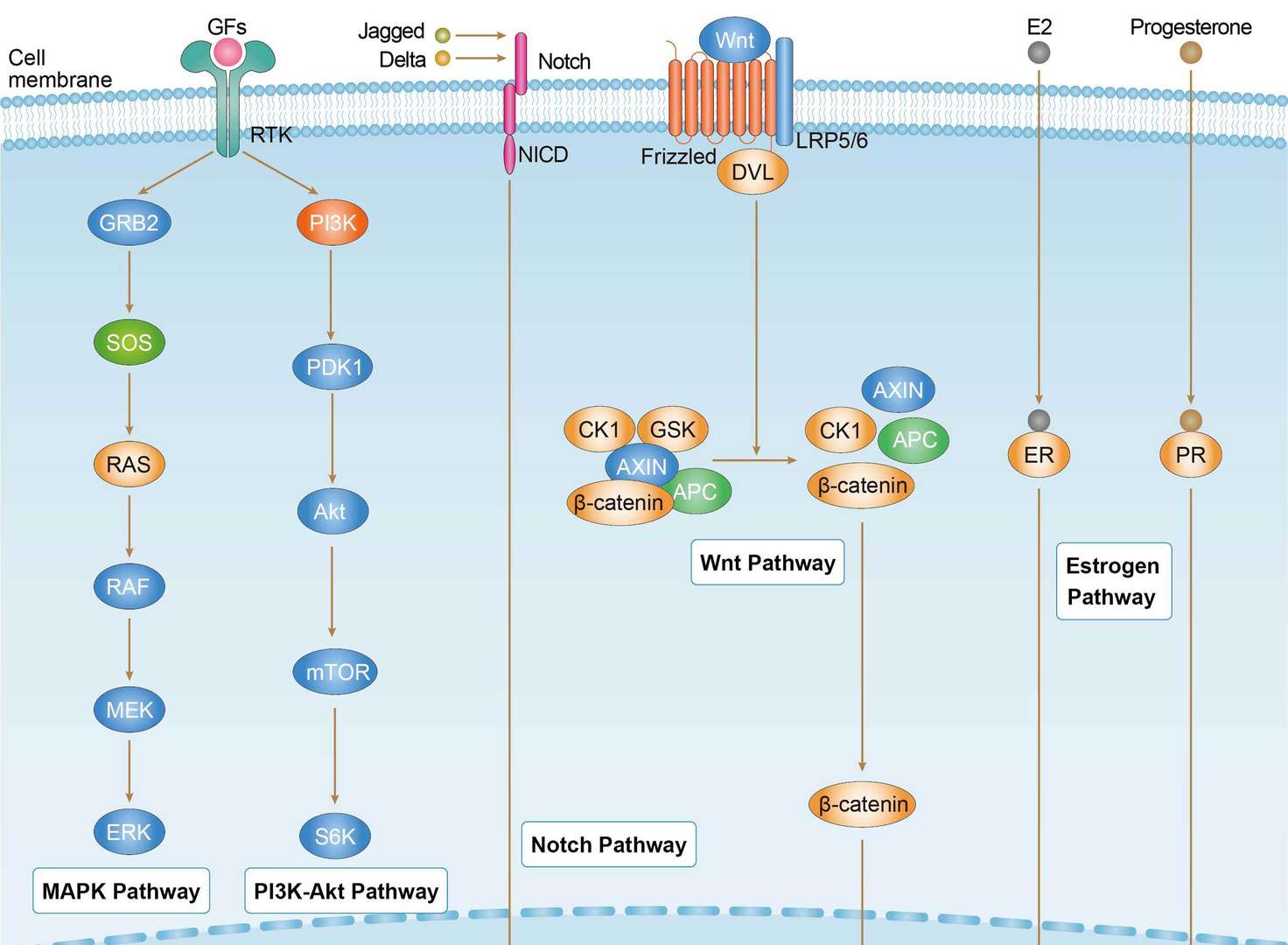