The ErbB receptor family (also known as the epidermal growth factor receptor (EGFR) family is a major class of receptor tyrosine kinase (RTK) protooncogenes. They are important in many cell regulatory processes, such as proliferation, migration, adhesion, and, potentially, cellular transformation. The ErbB family consists of 4 members: ErbB1 (also called EGFR and HER1), ErbB2 (c-erbB-2 and HER2/neu), ErbB3 (HER3), and ErbB4 (HER4). Dimerization by binding two monomers is the regulatory mechanism for activating RTKs. In some cases, the formation of heterodimeric complexes allows interaction and crosstalk between different receptors of the same subfamily, and the ErbB receptor family is the best example of homo- and heterodimerization in vivo. Ligands can either display receptor specificity (i.e. EGF, TGF-α, AR, and Epigen bind EGFR) or bind to one or more related receptors; neuregulins 1-4 bind ErbB3 and ErbB4 while HB-EGF, epiregulin, and β-cellulin activate EGFR and ErbB4. ErbB2 lacks a known ligand, but recent structural studies suggest its structure resembles a ligand-activated state and favors dimerization. The ErbB receptors signal through Akt, MAPK, and many other pathways to regulate cell proliferation, migration, differentiation, apoptosis, and cell motility. ErbB family members and some of their ligands are often over-expressed, amplified, or mutated in many forms of cancer, making them important therapeutic targets. For example, researchers have found EGFR to be amplified and/or mutated in gliomas and NSCLC while ErbB2 amplifications are seen in breast, ovarian, bladder, NSCLC, as well as several other tumor types. Preclinical and clinical studies have shown that dual targeting of ErbB receptors display better efficacy than single treatment.

Besides functioning as receptors on the cell surface, ErbB family proteins are also present in the nucleus to act as both kinases and transcriptional regulators. For example, EGFR could be transported into the nucleus where it functions as a tyrosine kinase to phosphorylate and stabilize PCNA. Similarly, membrane bound ErbB2 interacts with importin β1 and Nup358 and migrates to the nucleus via endocytic vesicles. Inside the nucleus, ErbB2 modulates the transcription of multiple downstream genes including COX-2. In addition, NRG or TPA stimulation promotes ErbB4 cleavage by γ-secretase, releasing an 80 kDa intracellular domain that translocates to the nucleus to induce differentiation or apoptosis. Upon activation and cleavage, ErbB4 can also form a complex with TAB2 and N-CoR to repress gene expression. Signaling through ErbB networks is modulated through dense positive and negative feedback and feed forward loops, including transcription-independent early loops and late loops mediated by newly synthesized proteins and miRNAs. For example, activated receptors can be switched “off” through dephosphorylation, receptor ubiquitination, or removal of active receptors from the cell surface through endosomal sorting and lysosomal degradation. 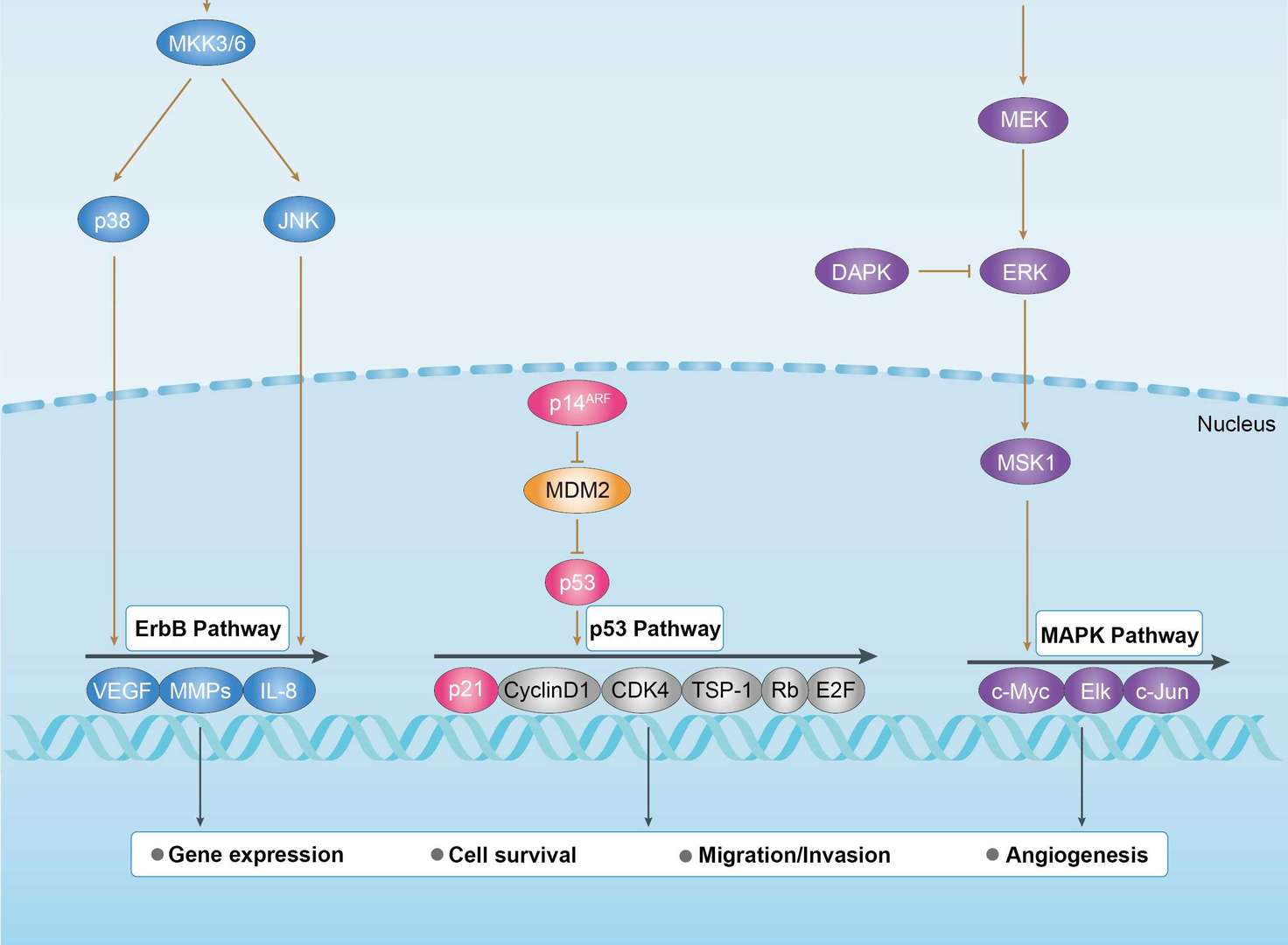